Interracial Relations, the Media, and Obama

Thus I am told that I’m not able to understand the significance of the black experience. For example, I have no idea what that means. So allegedly I can’t judge the portrayal of blacks in today’s media. Fine, that’s not what I want to talk about anyway.

Yesterday we celebrated Martin Luther King Day, today we officially swore in our first black President (I don’t agree with his politics, but congratulations anyway), and next month is Black History Month. For someone like me who doesn’t care which crayon God uses in his little coloring book called planet Earth, I can still appreciate the significance of it all. However, I’m doing an entertainment blog focusing on the art of storytelling, and there’s one area that I can still voice an opinion on, and that would be how black and white people interact in the fictional multiverse. I can give you the short version in three words:

Things are better than they used to be, when Star Trek was innovative for having all races (including alien ones) equals, and even had the first interracial kiss (even if the characters were being forced to, only viewers cared that they had different skin colors). There are show where friendships are based on who they are, not what they look like. Static Shock featured the main characters Virgil and Ritchie as friends, with Ritchie aiding Virgil in his gig as Static, and later teaming up as Gear. In the current USA Network series Psych, which admittedly I don’t watch, the main characters are an interracial team solving mysteries while one pretends to be a psychic detective. Other ensemble shows do have an interracial mix where color means nothing. So does this mean that King’s dream of being judge by character rather than skin color, or that black boys and girls are holding hands with white boys and girls “as sisters and brothers”? 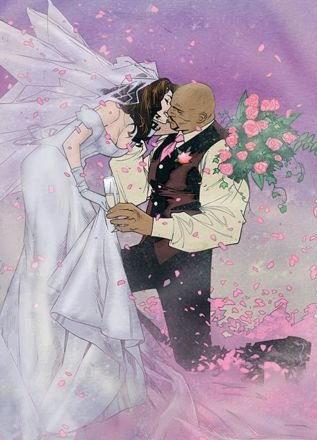 There is still one area I’m just not seeing, and while it’s not the final barrier it’s probably the biggest one. And that area is interracial dating and marriage. Seriously, maybe I’m just not watching the right shows or reading the right comics, but how many interracial couples do you see in fiction? I can’t even think of one currently except for Luke Cage and Jessica Jones over in Marvel Comics. However, Spider-Marriage aside, marriage tends to be temporary in the Marvel Universe. Just ask the Pyms in both the regular and Ultimate lines. Look at Vision and Scarlet Witch, or Scott Summers and (insert wife here). Then there are Reed and Sue Richards, who teeter on the bring of divorce every time the writer decides to play games with the line-up, or do something stupid like Civil War (like we needed another reason to hate that event).

Two examples of interracial relations since Kirk and Uhura were psychically forced to smooch are Moesha and The Fresh Prince of Bel Air. In the former, a series starring then teenage singing sensation Brandy in the title role, Moesha beings dating a white boy, and everyone around her is against it. Her parents worry about racist attitudes and her friends seem to demonstrate them. (Sadly, we don’t meet his family and friends to see their reaction.) Finally the boy breaks up with her rather than cause a rift between her and her family and friends. TV being TV, everything’s hunky dory by the next episode. (Personally, it would be a while before I talked to my family again, and I’d probably find friends who would rather I be happy than date someone of the skin color they approve of.) I’m going by memory, mind you, since I couldn’t find the show online.

I prefer The Fresh Prince‘s approach, which I’ve seen on TV more recently. One of Will’s aunts is getting married, and everyone gathers at the mansion. Everyone is shocked to find that her fiancé is white. While most of the family settle with the fact, Will’s mom is against it for the same reason Moesha’s parents were. However, she comes around since everybody else is comfortable with it and she realizes that her sister’s happiness is more important that the racist attitudes that still plague us. Even Will takes his mom to task. It’s one of my favorite episodes.

I know that tends to be the point of the stories, to demonstrate the racial divide when it comes to dating, but nobody does anything with it. As far as I remember, Will’s aunt never appears again, with or without her husband, and Moesha rather easily settles in to the fact that her boyfriend dumped her (right in front of everyone, if I recall correctly) because the people around her were against their relationship. Oddly, I can’t think of a “white” cast show where the same problem comes up. Wait, there was that episode of The Golden Girls, but the white mother was more upset by the age difference (she was twice her son’s age) than the skin color, which bothered the other lady’s mom.

Like I said, I can’t think of a single show out there (the occasional movie, but only if that’s the plot) with an interracial couple where their different melanin shades aren’t an issue, much less one that exists for more than one episode. On the other hand, gay couplings on shows may rattle their friends’ cages for a while, but eventually it is not considered a big deal, except by the “evil” characters. (One of my mom’s soap operas had a guy trying to kill his son’s boyfriend.) Meanwhile, even the otherwise “good” characters will protest an interracial coupling and seldom let go of it. And if they do you won’t see the couple again, so who cares?

I’m not coming down against the homosexual couples (for one thing, I’m looking down enough crosshairs here as it is), but the reasoning on the part of the writers. (And that’s not counting using gay characters to get press. I’m looking at you, Ellenand Batwoman!) Even in gay shows, they may have issues with the color barrier. The point of the gay relationships usually is to break down the audience’s resistance to homosexuality. (It would be nice if it was because they thought the characters would be interesting, but I’m too jaded at Hollywood’s incessant need for agendas, yet another trend comic books emulate these days.) If that is indeed the case, why not, after initial concerns as when a character “comes out”, give the same credence to interracial relationships? The only one that comes to mind are two characters in Power Rangers Lightspeed Rescue, a black man and an Asian woman later shown married in the next Power Rangers series, Time Force. (And this is after what appears to be an abandoned subplot about a white male Ranger being attracted to a black female Ranger in Zeo.)

Unfortunately, this bleeds into the real world. Specifically, I remember a talk show where a black woman who was even married to a white man was now against interracial coupling, and said she was raising her son to be black, ignoring half of his heritage. She was joined by a rather attractive black woman that I wouldn’t have mind dating otherwise, and both women came up with some rather lame excuse for not mixing races. Or maybe I just don’t get the “black experience vs. white experience” argument.

And this leads to our new President. 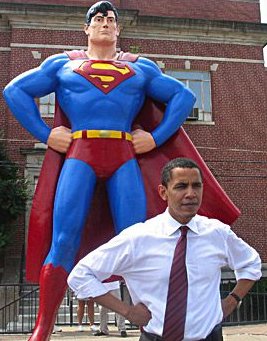 Fact check: Barrack Obama is half white. Shocker, isn’t it? Sadly, I don’t know which parent was white, and I’m surprised his critics (and those in the civil rights movement who want to prove racism isn’t dead, mostly because if it was they’d be out of work) even got that information out. All we heard was that Obama is our first black President, rather than our first mixed heritage President. What an opportunity we have lost here. Think about it. Obama is supposed to be a uniter, correct? Well, why not take the opportunity to bring the races together? Barrack Obama could have been held up as living proof that the races can get together and produce a child out of love that broke the racial divide. Instead, “they” decided to play the “race card” and let us all know he was black and you were racist if you didn’t vote for him. (I remember a story where some girl was called a racist by her classmates because she wore a pro-Palin shirt, and none of them were old enough to vote. The girl just happened to meet Sarah Palin and wanted to show her support.) I fear that many people of all races voted for Obama because of the color of his skin rather than the content of his character, whatever you may think of that character. 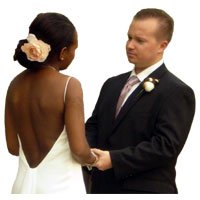 And isn’t that the opposite of King’s dream? Not that he wouldn’t be happy with Obama, or a black President. I never met the man and wouldn’t think to speak for him. However, maybe I’m taking something else out of the speech I posted yesterday. I thought he was asking for a country where we weren’t “black people” and “white people”, where we weren’t using separate facilities. But as long as, positive or negative, we look at someone based on color, and insist that we can’t like the same music (how many African-American performers are looked down on because white guys like their music by other African-Americans?), enjoy the same shows, hang out at the same clubs, worship the same God at the same church, or date someone of different color, we will never end the “race war”, and groups like the Ku Klux Klan and the Black Panthers continue to divide us, continue to instill hate based on the color palette, and divide us based on something that shouldn’t make any more difference than hair or eye color. And we change those at the drop of a hat with skin dye or tinted contact lenses.

Maybe my “skin dye” idea isn’t as crazy as I think. I wonder how I’d look as a Hispanic?