Comics and the price issue

To be honest, the only reason I’m bringing this up is that I don’t have anything else to talk about. From Bleeding Cool:

That was the line back in December. “As long as we can” appears to be eight months. In August, three DC universe books make the jump. Emerald Warriors #1, Time Masters #2, and Mighty Crusaders #2. All solicited as standard size comics. No back up strips. All priced at $3.99 – when the first issue of the last two were both $2.99.

Although the oversized first issue sold at $3.99, the rest of the MA titles go for $2.99. Why can't the mainlines?

This isn’t happening with the comics I’m actually reading at this point (although the first issues of the Marvel Adventures titles were bigger, so was the supposed page number, but the standalone Pet Avengers comics have been $3.99), but how long will that last? The only $3.99 comics I collect are from independent publishers, which don’t have DC or Marvel’s money masters (Time Warner and Disney) behind them and can’t get the ad sponsorship or licensing income. (Then again, most of what few ads Marvel or DC’s comics have these days come from licensing or their head honchos, really.)

So what is Marvel up to?

So, of the standard DC Superhero comics, two thirds are priced at $2.99. Of the publishers entire line, its almost three-quarters. For DC, $2.99 is the norm, and most (but not all) $3.99 books have extra content

Or their licensed titles, such as the Stephen King and Dabel Bros books, all six are $3.99

DC at least tried to throw in a back-up feature, but it sounds like that although those will be dropping off the higher price will remain. I wish we’d get a breakdown of what these things cost from the comic companies. The best I can do is look at what Ka-Blam charges. 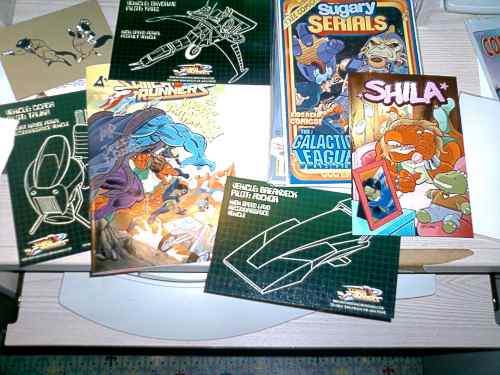 Sure this was pricey, but look what you got for it.

Ka-Blam is a “print on demand” service for independent publishers, highly promoted by BW fave Art & Story. They offer other services to help independents get their comics out. I’m talking publishers so small that Diamond won’t carry them in the Previews catalog. Now, even if the critics of such services are right that the result isn’t as “high quality” as what the big two come out with, it’s all I have to work with. Although I did grab my copy of Switch Runners, and I don’t see that big a difference. Maybe I’m just not comic snob enough or something.

So using Ka-Blam’s pricing page, a standard sized comic at full color at the 24 page average and no Ka-Blam ad will run you $3.29 for a single issue. That’s ONE issue. If you sell the comic at that, however, you will not break even. You still have the cost of the paper, the ink, and promotion work to do.

Big time comic publishers, however, don’t pay for the boards or art supplies. They pay for the finished work, and then publish it. They pay the talent (hopefully) and do the promotional work. So what kind of a deal do DC and Marvel have when doing this in bulk? Printing costs is the biggest reason they give for upping the price. However, then then give us variant covers (IDW, Boom Kids (that the KIDS targeted line) and Moonstone, to list the ones who print the titles I like on a regular basis, also do this), hire the biggest names (and therefore the most expensive), including non-comic authors like Stephen King, to either work or license their more famous works, and then complain about the cost of doing business.

J. Michael wrote a few issues of the comic based on Babylon 5.

Yes, I know bringing in Stephen King brings in his fans, but does that necessarily translate to more comic readers, or just more readers of whatever comic Stephen King is writing? The same with J. Michael Straczynski or even comic names like Dwyane McDuffie, both of whom aren’t allowed to really write their stories thanks to editorial mandates and crossover events.

They also don’t really listen to fans. I will grant you that if you try to cater to every fan’s desire whatever story you want to tell will not be told, so no matter how bad a certain group thinks character A and character B should be closer than they are, that won’t work for the story you want to tell, and that comes first. On the other hand, when fans don’t want to see beloved 5-year-old characters blown up or be hit over the head with social/political commentary (there were plenty of anti-Spider marriage fans outside of the Marvel offices that I couldn’t really go with that, although many of them don’t like the Mephiso option with it being out of character for Peter and no I won’t shut up about it already), you need to take that into consideration as well.

Also, why have Marvel and DC stopped printing ads not featuring their comics or spin-off merchandise? I have plenty of comics with advertisements and the only ones that bother me are the Child’s Play sequel advertisements because Chucky is rather disturbing to have looking back at you over your morning Rice Chex. That’s a personal concern, and doesn’t really matter here. For that matter, why aren’t the smaller companies using ads? Companies may be looking to maximize their ad dollars at the smallest cost in this economy, but ask a fair price and even a company with a relatively small readership will be able to balance off the costs of doing business somewhat.

Which goes back to the the main question of this article: how much DOES it cost to produce and distribute a copy of Superman or The Amazing Spider-Man nowadays? Additionally, do those costs really call for the prices going so high when readership is dropping? (The law of supply and demand should come into this…that’s one of the most basic rules of business economics, I learned it in school.) What can they do to offset some of these costs without hurting the final product? And have the writers and editors so given over to their fanboy natures that they’re losing the rest of us, including fanboys of a different perspective?

And the big question: are they even looking at those questions with any kind of intense consideration?