The Smurfs #4: “The Smurfette 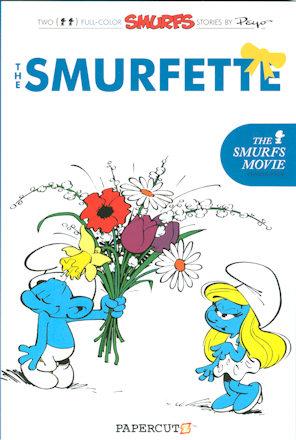 Papercutz (October 2010, but it only came last month, as solicited)

“The Smurfette” is the story that Hanna-Barbera later adapted into the origin story of Smurfette, and boy could I write a whole article about the differences. Much of it is still the same: Gargamel decides to create a female Smurf as revenge against the Smurfs (although unlike the show, that’s it, no further plan to capture the Smurfs). Some basic events are the same, but otherwise, you can find the differences in Smurfette’s Wikipedia page.

Some of them seem to border on some negative views towards women, although anyone who ever watched Beauty and the Geek knows such females exist. Gargamel creates Smurfette to cause havoc, but she’s not evil–she’s just female (or a rather insulting take on female). She becomes a blonde not because of having her evil removed but a magical “plastic surgery”, and only then is she the target of the Smurfs’s affections.

I’m not going to say to avoid it. Just the opposite, I say get it and then watch the episode. Also go to the Wiki page (http://en.wikipedia.org/wiki/Smurfette) to get the full behind-the-scenes on her creation and her place in the show. It’s rather fascinating, and still amusing watching the Smurfs react to this strange creature. (Although it may bring up a lot of questions as to how Smurfs reproduce.) Plus there’s a decent back-up story in which the Smurfs’s warehouse burns down in winter and they have to go hunting for food.