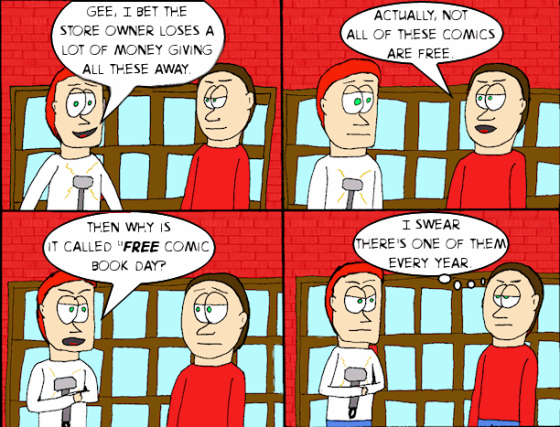 Think how the store owners feel.

Oh, come on, you know that somewhere in this country at least one person is under the impression that they’re just handing out all their comics for free and not just a small batch. Well, Free Comic Book Day has come and gone. This year I used the Twitter to post my live reactions to the comics. If you don’t want to scroll them, then in place of a news wrap-up (Best Scene of the Week will still be at the end) here is a wrap-up of my thoughts, plus some Tweet highlights.

By the way I missed out on a few comics I was hoping to get but they were gone before I got there: The Misadventures of Adam West, this year’s Atomic Robo offering, Inspector Gadget, and Super Dinosaur although I did go ahead and pick that last one up anyway, and it will be reviewed this week.

#BW_FCBD Remember how the Spider-Marriage is undone because Peter shouldn't be happy? Then explain page 1!

#BW_FCBD "My life has never been better! I work in a lab, I"m with the Avengers, and I'm totally relatable to the common working stiff." 😛

Seriously, I thought this was supposed to be the down-to-earth relatable Spider-Man that couldn’t be married to a model/actress or be a teacher. That aside, the story wasn’t that bad. Granted a story in which a talking mandrill in a business suit uses his pheromones to control Spider-Woman is up to your tastes. The Shang-Chi team-up where he teaches Spidey Kung-Fu must make Snell of Slay Monstrobot a happy man. It did expose one new “why” moment. No, not Julia Carpenter becoming the new Madame Web (although I didn’t know that was a title), although that is pretty lame. Why does Spider-Man now no longer have one of his trademark powers, his Spider-Sense? There’s also a preview for the next arc that will be about everyone in New York having spider-powers. Not sure if that’s a good thing.

#BW_FCBD "Let's get Yankee Doodle Doo in here"? First I thought they were talking street in WW2 (and failing).

#BW_FCBD Can Thor hold off a hydra? What do you want him to do after breakfast?

#BW_FCBD Loki is talking about how he now has ultimate power. Cap's response. "And now it looks like rain." I need to find the full series.

I didn’t follow Roger Langridge’s Thor: The Mighty Avenger because I’m not really a fan of Thor, although I did love Roger’s work in The Muppet Show: The Comic Book. However, after reading this comic I kind of wish I had. It was a fun comic and I like Loki better as a mischievous trickster rather than a full-on supervillain trying to take Odin’s throne and kill his half-brother.

#BW_FCBD I picked up "Civil War Adv." because my friend is a history teacher. Let's see if it's any good.

My friend is a history teacher so I thought this might be something that would interest him. It wasn’t to my taste, though. A series of short stories with some decent names behind it (such as Chuck Dixon), Civil War Adventures are a series of short stories and brief info pages taking place guess when. It’s well produced but not the kind of thing that interests me. The first graphic novel is out with two announced, one with a release date this month.

#BW_FCBD Wait, the world of the Dark Crystal has a name? Did I miss that part?

#BW_FCBD What better bedtime story than a mouse who kills three animal. Granted, it was a rather clever plan.

The biggest credit I give this book is that they found an artist who can do a painted art style that still feels like a comic book. You don’t see that too often among comics that used painted art. The story is just a set-up for Archaia’s upcoming prequel which as you see are being spread way too far apart. I was almost sure that Tokyopop’s Legends of the Dark Crystal two-part graphic novel wasn’t going to release the second volume and I would have missed it were it not for ComiXology. People who don’t use that or a similar service probably missed it, and I think Winter to Fall is too long a time. Why not wait so you can release them a few months apart? I don’t get it, but I’ll probably get the GNs.

The Mouse Guard story has a mouse telling his son the story of a rather clever mouse who finds a way to kill a hawk, a snake, and a crab using their their interests against them. I didn’t know crabs ate mice, but it is a well-told story. Although I just started wondering why the mice can build houses and walk on two legs but the predators in this story still pretty much act like animals who just happen to have human-level intelligence. On this side was a preview for another upcoming story, “Season of the Dapper Men”. While not to my interest, it is a well-imagined tale of a group of people who changed a mythical town, and how that was trained by them decides to see what his mentors had done elsewhere, leaving his mechanical angel friend behind. Again, well done but not in my field of interest.

#BW_FCBD OK, already continuity is taking a nosedive. Now Hal was kicked out of the family and NOT working for Ferris as a test pilot?

#BW_FCBD And Hal isn't the one who calls Tom "Pieface" because it's a racist comment. Because Hal is too awesome or some junk.

#BW_FCBD And now Carol was dating Hector and hated Hal from the start. You need a scorecard to follow all the changes.

My biggest problem, as you can tell, are all the continuity changes. This is a reprint of the second issue of the “Secret Origins” story arc, and it seems like Johns is too busy playing games with Hal’s backstory. Just create new characters from scratch instead of messing around with Hal and Barry’s story. I thought these were the best characters ever? STOP “IMPROVING” THEM, JOHNS!

#BW_FCBD And we open with a spoiler for this week's issue. Not a good sign.

#BW_FCBD Which seems odd since the story is a flashback to some BEFORE the current ARC.

#BW_FCBD And the story turns out to be pointless, and a flashback of "previously unknown" events. Otherwise it was a good one.

That says it all.

#BW_FCBD So good I didn't even want to stop to comment. Art Baltazar, Franco, and Mike Norton make a great team.

This was probably my favorite read of FCBD. I really like this team, and they may be my favorite in mainstream comics right about now. The story has Psycho Pirate using his voodoo that he do so well on the Young Justice gang (minus Artemis) reaching into their doubts. Also, the Atomic Skull appears and I’m curious to find out more about this version and his motivations. Kid Flash beats Pirate’s mask because of his metabolism and not a personal revelation, which was disappointing but otherwise a great story.

about Batman: The Brave & The Bold

#BW_FCBD I love how the rich snobs are saying bad things about Bruce that reflect what's happening to Batman. And Alfred appears!

The story has the Flash and Batman teaming up to take on Heatwave & Firefly while a bunch of rich stereotypes say bad things about the absent Bruce Wayne. There were a few missteps in the story, but giving Bruce some focus is something the cartoon fails to do so I can overlook the minor flaws and enjoy the story.

So that was my Free Comic Book Day. How was yours? Oh, and before I forget: 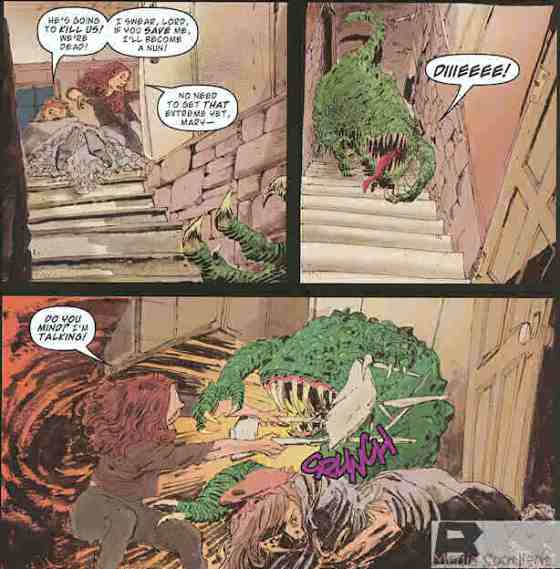 I also have a related article over at The Clutter Reports and I tried to get my comics organized before the next comic flood. Tomorrow we return to the comics I actually have to pay for with five new comics. Hopefully I’ll review them all on time this week. 🙂