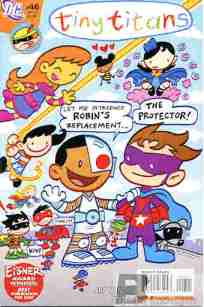 Thus the cutest war on drugs ever began.

Longtime BW readers know that I collect PSA comics because I have weird hobbies. I’ve also reviewed my favorite, the New Teen Titans anti-drug story produced by Keebler and the President’s Drug Awareness campaign. However, Nabisco had the rights to Robin’s likeness for their cookies and for some reason the Keebler-sponsored book couldn’t use him (Yeah, I don’t get it either.) Thus Robin was drawn over to create a new character, The Protector. His use here is why I bought the comic.

In the story: Robin has to leave on a secret mission with Batman, so he sends The Protector to take his spot while he’s away. This doesn’t sit well with Talon, who thinks that as an evil Robin from another dimension he has the right to take over. If that doesn’t get you, how about the identity of Lady Flashpoint revealed? (Or not.)

I of course bought this for the Tiny Titans version of The Protector, and they did a good job with him. There is even a nod to his origins that younger or less informed fans wouldn’t know but in a way that won’t confused said uniformed. (Although the character has a few minor appearances in DCU Proper.) I don’t know who Talon is because I don’t follow the comic and never heard of him in DCU Proper before. Even the character design looks like a painted-over version of Robin in this series. We even get a definition of “continuity”.

This was a fun comic, as typical, and while I’m not into getting every issue, I do enjoy this one and can easily recommend it.