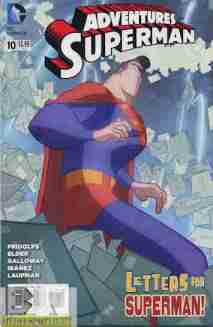 “You know, I really should pay some of these bills.

There’s a common theme to this issue involving letters to Superman. The first story could be considered a setup for the second, as letters are delivered to the Daily Planet in care of Lois or Clark for Superman. We see Clark reading some of these letters (including a woman sending in a sexy pic of herself) but ends up focusing on a kid worried about a monster…and that monster is himself!

While I’m not a fan of the artwork I can’t call it bad, either. What we get is a good look at how compassionate Superman can be in his solution, using his brains over his fists (although he is forced to fight at one point). Combining the metagene with diabetes was an interesting idea although this being the only Superman comic I would let kids read I do worry about how a diabetic kid would react. Still, it’s an interesting idea and a good read.

The better story is the second one and it convinces me that Josh Elder should have been given the Superman comic instead of Geoff Johns (which is still an improvement from Scott Lobdell I guess). A sick girl was able to see Superman in action against Metallo, giving her the courage to fight back. Superman is so touched that he pays the girl a visit.

I haven’t followed format the entire review, but I like the art here better and all I can say about the story is Josh Elder made me cry! Not bawling but tears fell, man. This has easily joined the list of my favorite Superman stories.

Recommendation: This is a must-own for Superman fans and on the list of comics Superman writers must look at to see how to do Superman right.