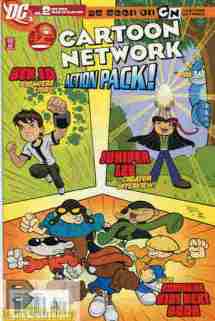 Juniper Lee does not appear in this issue. It’s just an interview with the creator.

The Ben 10 story you may have seen reprinted in IDW’s Free Comic Book Day sampler. The Tennysons are checking out a bullfight in Mexico not knowing that the bull is a robot. The matador just wanted to create a show and get his fans further behind him but when the robot goes berserk Ben and the Omnitrix goes into action. It’s an okay story but nothing spectacular.

When Mojo Jojo promised the winner of a competition between the Rowdyruff Boys free (stolen) candy, he kicks off our second tale as the trio get into mischief. However, the Powerpuff Girls foil both the Boys’ plans and Mojo’s plan to get the boys out of his hair so he could build a new death ray. I find myself enjoying these adventures with the little hooligans.

The final story is written by the KND creator but still feels a bit odd to me as far as being connected to the show. Numbah Two/Hogie has taken a job delivering notes around the school but finds himself being chased around. Somehow, Numbah Two having  a horse-like bicycle doesn’t surprise me but the two “foes” on horse-decorated rockets (as opposed to actual rocket bikes) doesn’t sit right and you would think the first comic appearance of the Kids Next Door would have them fighting the usual evil grown-up. It’s the weakest of the three but not that bad.

I forgot to mention last issue that the art on that book, and on this one, look very much like the cartoon and that’s always appreciated. While I wouldn’t push you to hunt down the comic they’re still good stories so if you come across it getting it wouldn’t be a horrible idea.