The Many Intros Of Batman part 2 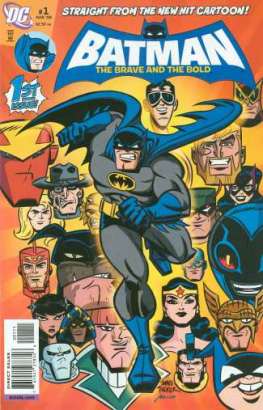 Yesterday I went over the first batch of Batman show intros, and tonight we go through the rest. I’m not counting movies or video games. Video game intros are kind of rare and movie intros don’t have to sell the same show week after week or day after day so mostly exist to get viewers through the credits that make the movie-making unions happy.

In the last installment I covered the serials, the Filmation shows, and the first of the DCAU shows. I’m still not counting team-up shows like Justice League and Super Friends…with one exception you’ll see coming up. First, let’s complete the DCAU intros and get to the other stuff.

The Adventures Of Batman And Robin

I’m not clear on the reason for re-branding Batman: The Animated Series as The Adventures Of Batman & Robin but that’s not the disappointing thing. The fact that a number of episodes still starred Batman solo and most of the “& Robin” stories were repeats from TAS but what matters here is the intro doesn’t try. It’s the only one that uses clips from the show (and oddly a couple of shots from the previous intro) rather than original animation, or even a mix as we’ll see coming up. It just comes off lazy from the team that brought you the previous intro and the next one.

As far as I know (we didn’t have a widescreen TV at the time) the show was not in widescreen but the intro was in a sort of fake widescreen. Of course I had trouble finding it that way so this is what we have. If you want to see it as it was, I found this upload from Batman Of The Future, the European name for Batman Beyond, and I would love to know why they changed it? I mean, I kind of understand with Teenage Mutant Ninja/Hero Turtles even if I don’t agree, but is “beyond” a bad word over there? There is one more intro from the Batman moving to Kids WB from Fox Kids, but it shares it with Superman so just I’ll leave that as its own review. The intro doesn’t get enough attention in my opinion.

The intro really sets the futuristic tone of the show. Set after Bruce is forced into retirement a troubled youth named Terry ends up taking over the mantle of the bat as things haven’t gone well for Gotham City since losing their protector. It opens on a rush-in to the futuristic Gotham, then goes over the typical Gotham City problems: apathy, greed, and corruption. Power can be used for good as well as evil, especially in superhero stories, so it makes for a nice transition to hope, which Batman represents. From hope comes honor and justice. The shots of teens dancing to the hot theme song (which closes in on Terry’s girlfriend, Dana) shows the focus to a younger crowd as Terry is in high school, as well as references to some of Terry’s enemies; most notably the Royal Flush Gang and Spellbinder, but oddly not Inque. It really draws you and then the show itself comes along and hooks you.

When the DCAU ended Kids WB (later the CW) was still interested in a Batman cartoon. So they turned to the guys who made Jackie Chan Adventures and this is what we got. This is a mix of original animation, show clips that highlight the characters, and a few editing tricks to make something that’s really quite good. I also really love this theme song, which is why it bugged me when they changed it.

Go to my original review to see what was changed when just Batgirl was added in season two. Robin would come after in season four, which is backwards to the lore but that’s a discussion for another time. I don’t hate the altered theme song mind you. In the comments of the original review it was noted that it took a few cues from the 60s show while I also see it as more of a surfer song quality. Either way it does work but the first theme was so much better. The visuals include clips from the show and the first intro but it works a bit better here than it did for The Adventures Of Batman & Robin. This started the trend of Batman shows being more action-oriented, while season one also focused on the gadgets to help push the role-play toys. Luckily the show rose above that and gave some really good Batman stories. I think the idea worked better when Cartoon Network did their first Batman cartoon.

(Also notice how Batgirl’s costume here seems to have inspired the one in the upcoming Ninja Turtles crossover. Interesting choice.)

Batman: The Brave And The Bold

A series that never took itself, or Batman, too seriously, you can really see it in the intro. The show features Batman teaming up with numerous DC heroes against a flood of Batman and other DC villains, just like the Bronze Age comic series it gets its name from. And yet the show was more tied to the Silver Age through a modern lens. It didn’t mock the period but it was inspired by the Silver Age and was a lot of fun. They even did an episode focusing on the villains, complete with a villain variation of the intro. However, Cartoon Network decided to go with a new direction a few seasons in, scrapping the show entirely in favor of something new.

I commented in my original review that I thought this was too short, a trend starting around this time with intros. It’s not as short as Gotham, an “intro” (more like a bunch of situational title screens) so short I’m not even putting it on the list. As I said could be possible I kind of warmed up to it but I really didn’t care for the art style. They also really played loose with the lore, but again this isn’t the article for that. I do like the theme song though.

And there you are, all the intros of Batman’s TV escapades (unless you remember one I missed), not counting movies, team-up stories, and video games. Which one was your favorite? I also hope you enjoyed this week’s tribute to the Caped Crusader.

Posted by ShadowWing Tronix on April 5, 2019 in Animation Spotlight, Batman, DC Spotlight, My Favorite/Not-So Favorite Intros and tagged Batman, Batman Beyond, Batman: The Brave & The Bold, Beware the Batman, intro, television intro, The Adventures Of Batman And Robin, The Batman, TV intros.