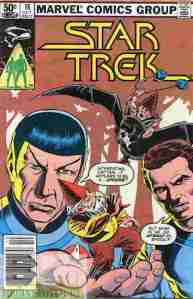 “Perhaps he saw the end of David The Gnome and realizes his fate as plant life?”

While investigating missing colonists on Valerian, the away team of Kirk, Spock, McCoy, Chekov, and an Andorian sociologist named Themon (her species is mildly important to the story) are attacked by “trolls” and rescued by “gnomes”. While McCoy takes an injured troll back to the ship “goblins” sneak aboard the crates with the colony supplies and damage communications. Eventually our heroes learn the trolls are actually colonists mutated by a disease caused by the gnomes, who are also impersonating goblins. They are the last of their people and only want to live alone in peace. With the colonists back to normal the Enterprise moves them to a new planet to colonize.

If you want see more I once used this comic for the late Friday Night Fights.

What they got right: While fantasy might feel out of place for a sci-fi show like Star Trek, using aliens to explain Earth folklore and religions is nothing new and neither are otherworld lifeforms with paranormal and matter-manipulating capabilities. Kirk shows cleverness in figuring out who their real enemy is and how to stop them, as well compassion when he learns why they messed with the colonists. Not that they were in the right considering how they went about things, but at least one of them was against killing.

What they got wrong: I don’t have access to the previous issues so I did some research and learned this is her only appearance (as far as the Memory Beta fan wiki of non-canon Star Trek indicates), so her romance with Chekov seems to just be an excuse for him to go off half-cocked when the trolls go after them. This story takes place after Star Trek: The Motion Picture but I don’t remember the tricorders looking like the one Spock has, although the phasers and the temporary bracelet communicators (I’m not sure why they dropped that outside of the handhelds being traditional or something) do match up. There is one odd dialog bit where the gnome leader says something in a way that makes he think the line he’s supposed to be responding to is missing and one rather odd shot of the Enterprise that looks like the nacelles are in the wrong spot but they’re minor nitpicks.

Recommendation: A good story and one that might have worked if the intended Phase II series have been made. Worth looking into.