Is This The New Lucasfilm Animation Logo? 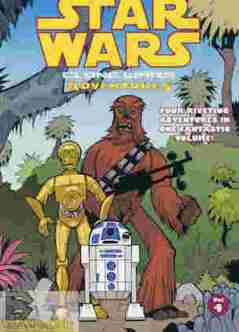 I want to have an article series about logos, but funny thing is I need time to make the logo.

I don’t know how to confirm this but Yakface contributor Jayson posted what is allegedly the new logo for Lucasfilm’s animation division. (That’s the name for a Star Wars collectors site, based on one of the names given to one of the action figures. I’m assuming it’s from the Cantina scene, because Kenner had all sorts of interesting names for the one-shots in that scene.) Of course since I maintain an interest in logos I had to check this one out. As a bonus I’m going to compare them to the other logos they’ve had since the division started with their version of The Clone Wars. The sad thing they were better off not changing it.

Oh don’t get me wrong, the last one they had was boring and didn’t make sense.

What is that even supposed to be? A walking hieroglyph? The font itself isn’t exactly all that interesting either. Frankly it needed an update. I’m just not sure this is it.

It’s the same font but now the “o” in “Animation” is replaced with a Clone Trooper helmet, possibly because their next project is the returning The Clone Wars for Disney+. Do that mean they’ll change the helmet for different shows in different periods of Star Wars history? What if they make an Indiana Jones cartoon? Or THX…you know, I don’t even want to risk giving them that idea. That movie was terrible. What about an American Graffiti cartoon? Not likely but my point is you’re branding this solely for Star Wars when Lucasfilm has other properties. Not a whole lot of them granted but they’re still there. The thing is what they should have done was create a logo similar to the actual Lucasfilm logo, not just one with a similar shape.

This is the logo they had back in 2003. Why not build on this? I was going to try to do it myself, but my art programs are giving me a headache but really all you need to do is give it the same glowing green edges and you’ll have something exciting and on brand. But go ahead and make a boring logo for kids entertainment. It’s not like DisneyFilm cares anymore. Or anybody else with these weak, lazy “logos” they’re coming up with. Oh, it’s a trooper helmet replacing an “o”. Never seen anything like that before.