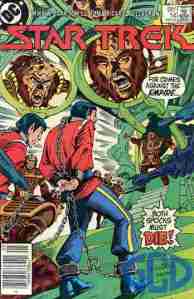 “What about your crimes against home decor? How do you even watch anything on those TVs?”

Surrounded by Empire forces, Kirk comes up with a plan to use the cloaked Bird Of Prey to attack the ship and allow them both time to escape. While Kirk takes the Excelsior to rescue the scientist David wants to rescue, Konom and the Spocks head to the Klingon homeworld to forge an alliance. At first the current Kahless refuses to listen even after subjecting Konom to a mind scan that proves he’s telling the truth, until Spock convinces him that the alliance will help further their empire. Meanwhile, Kirk, David, Chekov, Saavik, and Bearclaw go to rescue the scientist, but almost lose him. They manage to escape the prison planet of Gamma Trianguli XII but the mission isn’t over yet. We still have two more issue to this arc.

What they got right: Barr makes uses of comic original character Konom, a Klingon who is the rare pacifist and ended up joining Starfleet. Barr also accidentally predicts the state of the Mirror Universe as seen in Deep Space Nine with a possible origin.

What they got wrong: Name dropping Gamma Trianguli XII. At least if it had been XI you could have had the Empire taking over Vaal to protect the prison and giving them an even bigger challenge but one planet over is just using a random reference.

Recommendation: We’re getting near the end and so far this has been an good story arc. Worth checking out, but I’m hoping it ends well.