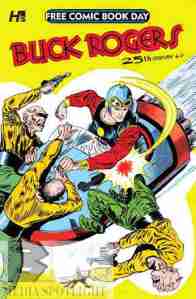 Try as they might they couldn’t get Buck out of the kiddie rocket.

COLORIST: comics.org isn’t sure but they believe it is Daniel Herman

“Origin: Meeting The Monguls” (originally published in the daily strips in 1929)

This featured reprinted stories from the Buck Rogers comics, as noted. Apparently Nowlan didn’t believe in giving a story time to breathe or truly end. The story jumps in just as a bunch of aliens from another dimension failed to steal Mars (as in the planet) thanks to Buck and Dr. Huer, so we begin with them taking the pair prisoner. They meet with the “Mind Of Minds” the brain that telepathically command the beings of this dimension and manage to paralyze it and convince the others to let them go. However, when it recovers it orders them taken prisoner again, and Huer has to stay behind so Buck can return to his dimension, only to end up not back on Mars but a moon of Pluto. The technology of the other dimensional people is a bit odd. Why travel on giant blocks that you hope stay balanced? Sure, none of Pluto’s moons has no atmosphere or vegetation but that’s not out of the norm for the time.

From there it jumps to Buck trying to survive on the moon (they don’t say which one), but some local savages keep messing with him and finally capture him as the tries to set signal fires for a passing ship, who ignores them. Wilma is somehow contacted by Huer, who manages to sneak out a message that Buck accidentally ended up on Pluto’s moon but despite saving the planet the commander of Martian security says it will take three weeks to mount a proper rescue. An impatient Wilma steals a ship and heads over there, coming across the ship that waved off the signal fires, and she figures out where Buck is and rescues him. However the natives sink the ship and their attempt to hail a new ship to help them free theirs turns out to be bad guys and…look, eventually they get back to Earth to learn they’re at war with Venus. Man does Nowlan seriously overdo this. It’s story after story and it doesn’t give one time to enjoy the story. Maybe it worked better in the Sunday strips where you read one a week but he wanted to make sure EVERY story was a cliffhanger. The serials weren’t this invested. The writing and art are good but at some point you wait for an ending that isn’t coming. Meanwhile Dr. Huer (who says “heh” a lot) is still in another dimension. That should have been the next story, not war with Venus.

For some reason the book ends with the beginning, the first week of weekday Buck Rogers strips chronicling his being trapped in a cave with gases that put him in suspended animation for a few centuries. The cave is opened and the fresh air revives Buck, where he immediately rescues Wilma from the Mongols. These mongols are now scientific wizards who slowly conquered the world and Wilma is part of an organization (“org” for short) opposing them. This being the 1920s in real time of course Buck signs up to fight the red menace. This origin doesn’t stand up to modern standards but it’s a quaint origin for the time.

Overall it isn’t a bad story if you like classic action sci-fi, or just want to see where Buck Rogers came from. Wilma actually saves Buck and isn’t just the stereotypical woman of the period, there is a lot of creativity involved in creating this world and the other dimension even if I can nitpick a few specifics, and it was an interesting read. It’s just not going to stand the test of time if you compare it to more recent incarnations.