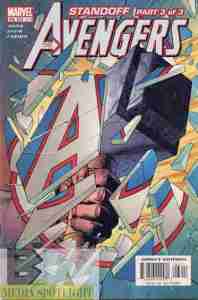 As the battle continues Thor smashes the “Thorbuster”, forcing Tony to continue with the normal Iron Man suit. However, Captain America manages to stop the fight, which doesn’t sit well with Doctor Doom. He takes control of his “gift” to the Slokovian army and fires at the heroes, re-enraging Thor as he thinks it was the dictator’s army on purpose. Cap sees what really happened and Iron Man hears over his radio that the Russians will wipe the whole area out if the US gets involved. The two race to stop the US and Russians from getting involved but it takes Thor almost killing Captain America to snap him out of it. In the end Doom annex’s Slokovia into Latveria but Iron Man sends a viral version of Friday into his computer that destroys the info on the reactor and will allow him to keep track of Doom. That’s the only victory as Thor leaves the Avengers.

What they got right: If the end goal of the story arc was to take Thor out of the Avengers for whatever reason this was a good story to do it. The three issues flow well enough given that three different writers were involved. This issue in particular focuses on the friendship between the three biggest Avengers–Thor, Iron Man, and Captain America. And in the end Doom only gets one victory out of it, more real estate for Latveria.

What they got wrong: Iron Man wearing armor over his other armor is not a surprise since he’s done it before, but why is he wearing the classic armor? It doesn’t make any difference thematically which armor he’s in (except in the picture Thor tosses down of the three of them) so why not have him in his current armor?

Recommendation: This was a rather good three-part mini-crossover that sets up a new dynamic for Thor, or rather continues the current one as he takes over for Odin until he un-dies. The art is also good in all three. So give it a look.