NOT Going Where No One Has Gone Before (thank heavens) 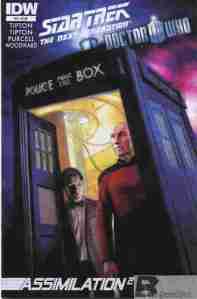 Whether you’re developing a series or just a story, sometimes you come up with ideas that evolve or are just dropped altogether. Heck, just making comics for fun I had two characters who underwent major changes from their early development back in the day.

IO9 recently put out “10 Things You Probably Didn’t Know About Star Trek: The Next Generation“, and while a few things didn’t interest me (I knew about the celebrity cameos and how many different ways they used a pom-pom in the visual effects department isn’t something I’m that interested in) there were a few ideas that the show dropped, and I think they were better off for it.

One idea was that Locutus would be a merger of Picard and Data, kind of like Tuvix in an episode of Star Trek: Voyager and since we all know how well that went (surprised SF Debris hasn’t gotten to it yet) that was probably for the best. At least Tuvix had the moral dilemma over who was more important to save, two friends or one new person. Also, I’m not sure how you’d pull that off, but I give them credit for asking the big question: why would the Borg do that? If you can’t come up with a reasonable answer, then don’t do it no matter how “totally cool” you think it would be.

In the same vein they wanted to have Boothby (the wise janitor from Starfleet Academy who not only helped Picard and Wesley through their days but was an important supporting cast member in the Starfleet Academy comic from Marvel’s “Paramount Comics” imprint) be the Traveler in disguise. Dropped because it would weaken Picard’s relationship with Boothby, but I would add it sounds like a twist just to have a twist.

Finally, before we get into the good stuff: why put the conference table on the bridge? The point of having a conference room is to get some quiet time away from the bridge action so the command team can discuss things and plan strategy, like…any organization that has a conference room. Also, someone wanted to give Troi three breasts, like that one prostitute in Total Recall. Go back to my comment about doing things just to do them. Now comes the stuff I want to give longer comments on: 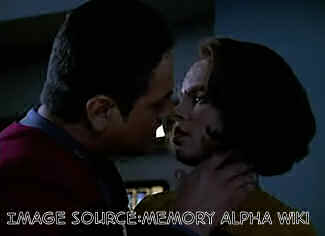 Wrong show, Chakotay. Also, not what they meant.

Play nice with the Klingons & Romulans

The article links to the season one writers guide, which I’m sure will be brought up in a future article. In it, Roddenberry wanted to keep the Vulcans out (which would have nixed the Sarek guest appearance that is probably one of the best Trek stories ever or at least TNG), which is odd considering how much he fought for Spock. Also forbidden: “stories about psi-forces or psychic powers,” “swords and sorcery,” “mad scientists, or stories in which technology is considered the villain.” Personally, I think this takes a bit away from things Star Trek did well, mixing the occasional fantasy element with science fiction. (On the other hand, “The Magicks of Megas-Tu” wouldn’t have been made and I wouldn’t have missed that. “Hey, kids, the most evil force in creation that wants to drag your souls to hell just to go “nyah nyah” to God? Just a harmless prankster who needs a second chance. Remind your pastor.”)

Now that’s all the article says about Kirk’s old playmates, so I should read through the writer’s guide and probably come back to this in the future, but did Gene not want any conflict? Sure the Klingons became our friends (until Deep Space Nine and the whole Dominion thing), but why include the Romulans? These were classic villains, it would be like the Doctor making friendly with the Daleks and Romulans. Classic Trek had more action than J.J. Abrams’ defenders give it credit for and good villains are part of that.

The safest way to travel?

Starships are yesterday’s travel method. We just use the transporter.

They were playing all sorts of games with the show. Would they set it even further in the future? What would starships be like? Well, for those of you who thought having families on board was a bad idea, I present to you the transporter in place of the starship. In other words, Stargate SG-1 before we even had Stargate. (Unless I’m wrong about the movie’s release, time doesn’t allow me to check as of this writing.) Remember that scene in Abram’s version where Scotty rigged a transporter to beam himself and Kirk across space onto a ship in warp? Well, we could have that a long time before.

This would have been stupid for the obvious reason that it would make exploration (TNG was supposed to be continuing that theme, after all) more difficult. In SG-1 you needed another Stargate, and luckily the Goa’uld were dropping them like litterbugs. The transporter may or may not need a receiver at that distance, but it’s nice having a base and supplies you can trust that you can contact easily and rescue your backsides when you tick off the natives because you accidentally sneezed on the Sacred Pebble of Zah’U’Deen and forgot to do the apology dance you never knew about. And would injure your fifth elbow, which would also be a requirement you may lack. Besides, starships are cool.

“Wesley, are you…fully fuctional?” “I need an adult!”

Tasha and Wesley a couple?

Before your brain explodes, let’s look at the individual ideas. This comes from the same section on IO9’s list about avoiding old tropes:

The original series bible (which is a fascinating read), also says Picard and Riker have a “father-son relationship,” and Picard often pretends to think France is “the only true civilization on Earth.” Also, the phrase “fully functional” is underlined when discussing Data. And Tasha Yar is obsessed with Wesley Crusher, who’s her “beau ideal” and the childhood friend she never had. Also, Picard “cannot help noticing that Beverly Crusher’s natural walk resembles that of a striptease queen.” Source: Original Bible.

The Picard jokes with Riker and Beverly are obvious and been done without this bit of info, but Picard pulling a Checkov with his homeland would have made him eventually unlikable as a captain if you ask me. And we can further question Dr. Soong’s lifestyle with Data, but we’ve already seen that in action with Tasha, God help us. (Yes, apparently you CAN f$#$ it.) The interesting part (emphasis mine, by the way) is that Tasha is obsessed with Wesley. Childhood friend she never had, fine, but “beau ideal”? Either Tasha (who was originally planned to be “a tough Latina named Macha Hernandez”) was intended to be younger or Wesley (who was going to be a girl named Leslie at one point, make of that what you will and I’m sure the anti-Wesley people will) was going to be older. Otherwise, this could have gotten veeeeeeery creepy.

I would also note that Marina Sirtis and Denise Crosby read for each other’s roles, so you might have ended up with Sirtis playing a “tough Latina” hitting on Wil Wheaton every episode, and I’m not sure he would have complained. Unless he was replaced by a girl, which just brings up even more images I’d rather avoid.

[UPDATE: In the years since, while going over the writer’s guide for season one on my own (there are some links in the comments) I’ve come to learn that “beau ideal” has nothing to do with wanting Wes to be her beau (a word often used in place of “boyfriend”) but is instead something or someone you want to be like. That’s certainly less creepy.] 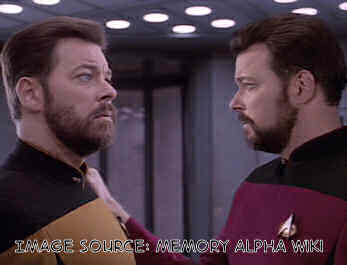 Because I don’t want to leave you on that mental image:

In the episode “Second Chances,” where we meet the Transporter duplicate of Will Riker, the writing staff seriously considered killing off the “original” Riker and bringing the Transporter twin, Thomas Riker, on as a new crewmember. Because Thomas Riker had a lower rank, he would have become the ops officer, and Data would have taken Will Riker’s place as First Officer.

While IO9 wanted to focus on Data being the new Number One, let us take a look at the other side, namely killing one character in favor of his transporter-accident created clone. (Ooh, there’s one I forgot to bring up earlier.) What reason they have for wanting to kill “our” Will Riker off? Sure, there’s something to be explored with Thomas, but did they think they were done with Will, and couldn’t do anything else after that? Granted, it was the second to last season, but it would be weird to change the dynamic of the crew without changing actors.

So I find it fascinating what gets changed as you continue to develop a story or series. I think we’re all better off that these never took place (we eventually got our Romulan and Klingon battles, for example), because it would have been a very different Generation, and most of the time I like what they did. Then again, I wouldn’t have noticed they didn’t go that route, so who knows what the reaction would have been.

Posted by ShadowWing Tronix on October 6, 2011 in Television Spotlight and tagged Star Trek: The Next Generation.