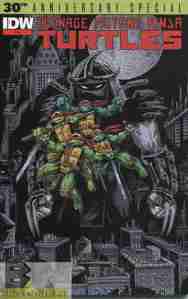 “No, sir. I didn’t see you playing with your dolls again.”

This anthology features five versions of the Ninja Turtles comics, plus some information on the history of the franchise. The comic continuities are the original and resumed Mirage series, the Archie comics (which began adapting the first cartoon before going in its own direction), the Image comics, and the current IDW series.  I’m not surprised that the Dreamwave series (which was loosely based on the second cartoon) and IDW’s animated title (based on the current Nickelodeon series) are not represented but I wish they had done something for the newspaper strip.

For this review I will look at the stories presented from each series as well as discuss what little I know of each and how well it’s represented here. The IDW one should be easy. 🙂

If I understand the intro correctly this story appeared in the Hero Initiative’s Hero Comics publication so it’s not original to this piece. However, it’s a fun little story as Michelangelo has to complete a task to win a bet. Eastman lets the details of the bet out a little at a time making you wonder what’s going on but curious enough to keep reading. It’s done in the original style and in black and white so telling the Turtles apart is as frustrating as ever until you get enough dialog to gauge their personalities, but I still enjoyed the story.

I didn’t get to read a lot of the original comics when they came out outside of a collection of the storyline where the Turtles ended up in space but I can see how this started the independent comics boom of the 1980s. I prefer the Color Classics, though. Although I wish IDW would adopt the colored bandana masks instead of sticking to all red.

Leo, Mike, and Don find a spaceship in New York. That ship belongs to BeBop and Rocksteady, who popped in from Eden World to get some snacks…legally. (And naked.) Try convincing Raphael and Ninjara of that. Which leads to the following questions: Who is Ninjara? Why is Raph black from head to toe? What’s Eden World? Why is Michelangelo suddenly the cynical one and when did Leon and Raph’s relationship become the one from the movies? I don’t know what’s going on here because I haven’t been as exposed to the Archie Turtleverse. This story lost me big time.

My experience is limited to some early issues I found, the April O’Neil miniseries (of which I don’t have all of the issues), and the crossover with the Archie characters which also had some side stories that came off a bit preachy. They were good stories and I would like to get more (I know they’re being reprinted in trade form right now), and the Mighty Mutanimals spin-off but since I haven’t read those I was clueless on this story which killed my enjoyment.

Mikey gets a cast taken off his leg and the others decide he needs to train it back into shape. In the sewers, however, they come across the guy who took out Raphael’s eye and has armor similar to Don’s…because that’s all he has left. Unlike the previous story this tells you just enough to make you curious about what’s going on without ruining the story if you have no connection to this series.

A series that lost me on the first issue, by the way. As I recall, Don was hurt really bad and since he was my favorite Turtle I didn’t want to read a comic where he was torn apart at the time. Years later I would learn about the cybernetic body, Mikey hooking up with one of the Savage Dragon supporting cast, and saw no need to check into this one. I’ve heard I’m not the only one turned off by this version.

Leo is wondering if what the Turtles do matter when they’re interrupted by an attack from an old friend. And this time it is a friend, Shadow. I only know who Shadow is because I’ve read up on this series. (I’ll get into that next paragraph.) It’s not as bad as the TMNT Adv story and the guys knew who she was because they seemed to be taking it easy on her compared to, for example, a Foot soldier. Fun little story.

Like I said, I’ve read up on this series and flipped through one or two issues of the “Tales” sister series, but not having read the first version I stayed away from this one, but it’s something I hope IDW reprints once they’re done with the first one.

In a story set during the early days of the comic (which means the all-red masks because April didn’t bring the colored masks yet) Raphael is trying to adjust to having three brothers and a father and it’s not going well. But a night out with Casey might give him some insight into his new life. This is a great story, showing character depth and one of the better “untold” stories of the special.

You guys should already know my opinion on this continuity. It blends parts of the other comics, the cartoons, and the movies together well and I have nothing but praise for it. But whatever version you prefer (you’ve got five comic books, a comic strip, numerous video games, four theatrical movies, three cartoon, a live-action TV show, and an upcoming Michael Bay film to choose from) there’s no wrong answer to “what’s your favorite version”. Each has something to offer (yes, even the third movie and there has to be at least one thing in the Bay movie, right?) and there’s something for everyone, which is the sign of a good franchise if they have more than one continuity to it. Outside of the Adventures story this was a good representation of the franchise and worth getting for fans.