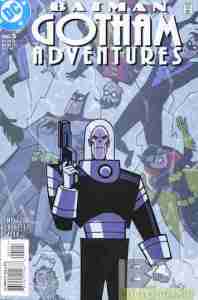 “I hear the bank needs a new AC Unit.”

Waynetech’s “Project Immortality” is studying Mr. Freeze without his approval since Freeze’s suit was made with stolen Waynetech parts. However Freeze has a connection to one of the scientists coming to help…his ex-wife’s new husband! He’s also one of the scientists kidnapped by Grant Walker, who managed to escape his ice prison and now his body is deteriorating as Freeze’s did. Still obsessed with his own immortality, Walker wants the scientists to cure him. Freeze manages to convince Batgirl and Nightwing to let him help, Tim tending to Bruce after Walker tried to kill him during the kidnapping. They go to the remains of Oceania, and deal with Walker’s death traps. Batgirl saves Freeze but gets trapped in some rubble, Freeze not caring since all he wants to do is rescue Nora’s husband, leaving Nightwing to free her. Freeze confronts Walker, but is stopped from killing him because Nightwing has a killswitch for Freeze’s robot body, but he manages to eject and escape, the scientist blocking their path because Nora still has feelings for Freeze.

What they got right: I like how these comics can bring in characters that only showed up once in the show, provided there is more story to tell. And there is one here. Walker is a good counterpoint to Mr. Freeze, a villain obsessed with his own mortality and not caring for anyone else, while Freeze at least cares about Nora and claims to have no emotion…even more so at this period, where he was actively trying to destroy other people’s dreams out of anguish because he could never be with Nora again. (Some people don’t like that character change and think the character should have disappeared after the Subzero movie that completed his arc. I kind of agree outside of that Batman Beyond episode, but it led to this story so it’s not all bad.)
What they got wrong: Okay, Waynetech as a right to the exo-suit, although you could make legal cases against that as well, but I don’t think that gives them the right to experiment on Freeze without his permission. And right now he’s a head in a jar on legs. Cloning him a new body was a plot point in a series that took place years in the future so they can’t do it now. Would he want to be saved at this point even if he had emotions?

Other notes: According to the DCAU Wiki Nora’s new husband would have built a robot to frame Freeze for Walker’s murder in a comic story that was never made. I’m glad they never made that story, either to the cancellation of the title or a smart move on the editor’s part, because it would be a detriment to the character. Better to have him be a good man to explain why Nora married him after she was restored.

Recommendation: A good story that allows someone other than Batman to see some action and a decent Mr. Freeze story. Worth checking out.