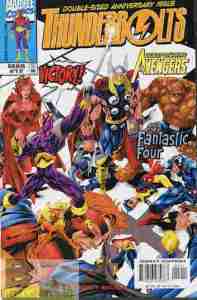 “Now to make Kevin Feige do my character properly!”

When we last left the Thunderbolts Zemo had taken control of the world via a “biological modem” sending a signal through computers around the world, and even snagged the Avengers and Fantastic Four. The Thunderbolts manage to escape, aided by Atlas when Zemo threatened to kill Jolt, to an abandoned space station, followed by Iron Man, who has safeguards in his armor to protect him from mind control. As Iron Man and MACH-1 work on a counter to the bio-modem Jolt works out a plan to stop Zemo. As the Thunderbolts and restored heroes distract Techno, Meteorite confronts and beats the tar out of Zemo for ruining her plans to clean her record (so she could pull more scams later) and for ruining what she thought was good scam potential as fake heroes. The combined heroes managed to destroy the station, but Atlas helps Zemo escape (Techno tags along), thus fulfilling any debt Erik has to Zemo. As the heroes try to decide what to do with the Thunderbolts, the team agrees to surrender to authorities only to mysteriously disappear.

What they got right: This final chapter in the Thunderbolts’ story needed the double-sized issue and it works well as an ending. The series could have ended here, or it could go on, but more on that in a moment. This was a good wrap-up of this phase of the Thunderbolts’ lives and some good action and character moments as well.

What they got wrong: One of Jolt’s word balloons is missing the zigzag they have when she’s powered up. Really that’s it, unless you count Songbird knocking out Invisible Woman when they’re only supposed to be pretending to fight the heroes.

Other notes: There are two ways this story could have gone. From a series perspective I like Meteorite’s idea that they could have kept the scam up, seeing where this could take the characters and possibly lead to a less forced face turn than this story demanded. The other is after this having the Thunderbolts serve their time (while clearing Jolt) or just straight-up having them win the trust of the public and other heroes, like Black Widow’s story about Hawkeye (who speaks in their defense), Scarlet Witch, and Quicksilver when they joined the Avengers. Unfortunately they went in neither of these directions, so the question is whether or not what they did do makes up for it. We’ll find out in later reviews, but I wish Jolt has been cleared since she was never a Master Of Evil.

Recommendation: These 12 issues and the two specials I’ve reviewed make for a great story all their own. Even if you don’t continue after this it’s worth reading these stories. I wonder what the odds are for a Thunderbolts appearance in the Cinematic Universe?