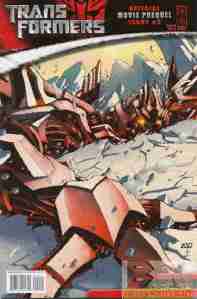 The cover’s just like the movie! I can’t tell what’s going on here either.

Megatron’s obsession with the All-Spark causes him to crash on Earth. Without power and burning from reentry he melts through the ice and goes into stasis lock. Years later, in 1897, Archibald Witwicky and his crew uncover the “Mega-Man” under the ice and something happens to Archibald’s mind, as he starts writing strange scribbles. His effects, including a certain pair of glasses, are sent to his family and the whole affair covered up by the US government as they try to dig him out, a mission that in 1902 is added to when the All-Spark is found Colorado. In the present the Hubble picks up another robot landing on Earth, namely Bumblebee. But by then a government task force is ready for his arrival.

What they got right: This is going to seem odd to you and if I remembered the video to link to you’d understand why this jumped up in my thoughts when I saw the racial make-up of the Sector 7 council guys. This video pointed out how every shadow organization head honchos always seem to have a particular race and age make-up. Like almost all of them. But here we have two black guys and one of them appears to be in charge. So either they didn’t get the memo (there’s a lack of an older woman for example and the lone black guy is usually window dressing who’s lucky to get a line) or they decided to buck the system. If I come across that video again I’ll have to post it for you guys. I wouldn’t have even noticed if not for that review. I think it came out recently.

Now that’s out of the way, we have Archibald frantically writing symbols, which we know now is due to being hit by Megatron, which also led to the location of the All-Spark ending up on his glasses. The writing thing would come again in Revenge Of The Fallen during Sam’s various spaz out Cybertronian writing attacks. It’s probably not intentional since this was long before the sequel but it’s an interesting notation. It’s one of the things that doesn’t spoil the revelations of the first movie but you’ll still pick up more in hindsight after having seen it. We also see Megatron’s decent into his obsession for the power of the All-Spark and how that doomed him until he’s awakened in the movie. And I really like the coloring in this one. Some good effects. Even the annoying washed out black & white flashbacks are easier to see in this one.

What they got wrong: I actually don’t have any. That’s rare for something with Simon Furman’s name attached but we have seen runs where that’s happened more than once (like most of his Dreamwave work) so it’s not as surprising as it should be. Maybe Ryall did the heavy lifting this issue?

Recommendation: This is actually a good story to pick up if you don’t mind the Bayverse Transformers.