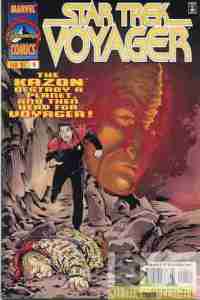 Low on supplies and resources, and just barely getting past a Kazon attack, Voyager heads to a planet where they can get some help. Unfortunately a plague has wiped out the plant life and the animals have starved to death. As Neelix and Chakotay try to find the surviving colonists, Tuvok and Harry find a rather aggressive automated strip mining operation made of the same metal as the missiles that may have caused the plague. Harry accidentally activates a beacon that unknown to the lost Federation ship has called the owners of this operation, and it’s the Kazon.

What they got right: With no way to reach a Starbase for supplies the ship often needs to find other ways of getting what they need, and we get that here. The set-up is well done…granted by Voyager standards. It does feel like it could be an episode, right down to adding the Captain’s Logs that were missing in the previous storyline.

What they got wrong: Neelix trying to protect Kes by keeping her off the away team is a plot point that goes nowhere after she finds out and isn’t happy about it. It doesn’t seem to factor into the story, at least thus far.

Recommendation: I’m not really a fan of Voyager but this does look to work as an episode. You might enjoy it, and I’m willing to see what the rest of the arc does before logging a protest.