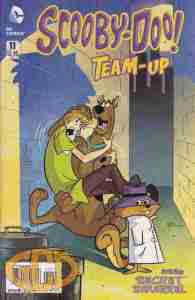 It sounds silly until the squirrel in a trenchcoat pulls a bomb out of his hat. Literally.

DC Comics (September, 2015, as reprinted in the comiXology version of the volume 2 trade)

A peace treaty is constantly interrupted by the ghost of the former ruler of one of those countries, who still holds a grudge. The Sneaky Service calls the gang in to team with Secret Squirrel and Morocco Mole to investigate. The ghost manages to capture our heroes and takes them to his secret death trap lair in a volcano. As I’m sure you guessed it’s not a real ghost, but Secret and Morocco’s old enemy Yellow Pinkie, who was selling weapons to both sides. The gang manages to capture him and escape the volcano before it erupts. The peace treaty is finally signed.

What they got right: The story takes cues from the classic Secret Squirrel and not the segment from Two Stupid Dogs, where they took a more anthropomorphic turn with the concept. Even if you can deal with Mystery, Inc hanging with a secret agent squirrel and mole I think the bull chief would have been a bit too far. Everything you’d expect from that original incarnation is here.

What they got wrong: Though outside of the fake ghost the opposite is true from a Scooby-Doo story. Yes, no mystery again but this time the villain is using the silly spy gadgets of the show so we don’t even get the slightly questionable science of a Scooby story. It’s a Secret Squirrel story and Scooby-Doo and the gang feel like guest-stars in their own comic.

Recommendation: If you want a good Scooby story this isn’t it. If you want a fun Secret Squirrel story with Mystery Inc there to interact then this is a fun story worth checking out.