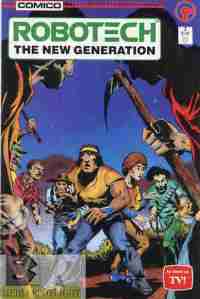 I don’t care personally, but this anti-pineapple pizza stuff is getting out of hand now.

Lunk makes a stop to return a book to the father of a man he was forced to leave behind in on the battlefield. However, the town  is nervous around strangers and they’re hiding a secret about the man Lunk is looking for. With Scott hiding the Alpha Fighter, the townspeople take Rook, Annie, and Lancer prisoner and steal their Cyclones. Lunk and Rand go searching for them and find out that the man had tried to talk the town out of fighting the Invid but they beat him to death instead, then lost to the Invid. Our heroes manage to recover their Cyclones while Lunk is given a gun that fits onto his truck. Together the group defeat the Invid and the town decides not to attempt to fight the Invid. Lunk decides to keep the book.

What they got right: It’s another “town afraid of strangers” story and another “we’re hiding a horrible crime we did against the person the hero is looking for” cliché but at least it’s told pretty well. While not outright saying so we may have learned why Lunk went AWOL with battle fatigue.

What they got wrong: When the restaurant refuses them service as part of trying to get them to leave town, Lunk says that as soldiers they have a right to just take the food, which doesn’t seem like something the heroes would do.

This is the part where I usually compare the comic to the episodes but this time I can’t. I did find a fansub (I think) of the Mospeada episode, “Fallen Hero’s Ragtime”, so I can tell you the town in that version already gave up trying to fight the Invid after their failure to heed Nader’s warnings (and the names are again the same from that episode except for our usual cast) and hid the mecha to keep the fighting from coming back to their village. As far as the Robotech side of things I can’t help you. All I could find were questionable uploads of the “Remaster” which is already a change from the 1980s TV edit the comics are actually based on since it’s just the Robotech audio reworked into an unedited version of the anime. Funimation still has the series behind the paywall while Filmrise actually distributed that and the official subbed anime on numerous sites so I just have another issue with Funimation’s actions lately as they’re damaging my review and paywalling a part of my childhood that was everywhere when I started these reviews.

What did I think overall: Since I can’t compare them to the episode I can only judge based on its own merits and it does feel a bit rushed. However, it hits all the important beats so it’s not a bad telling, just not as good as the show itself.