The Many MANY Intros Of Scooby-Doo> New Network, New Studio, New Look 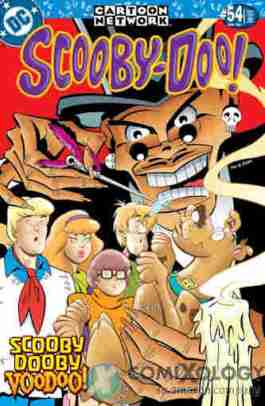 Scooby’s next TV series would involve some interesting changes, which makes it fitting that it was titled What’s New Scooby-Doo. 2002 would see the first new Scooby TV series since 1999, and it would be on a new network. By this point Ted Turner had merged his company with Time-Warner, meaning the Hanna-Barbera library now belonged essentially to Warner Brothers. Hanna-Barbera was now completely gone, at least in the US (the UK still has their Hanna-Barbera), so the direct-to-video movies would be produced by Warner Brothers Animation and thus would appear on Kids WB. Shaggy had returned to his green outfit, Daphne would get something reminiscent of her old outfit as would Velma, but Freddy would lose his classic ascot for years until nostalgia recently returned it to him.

Scott Innes was out as not only Shaggy but as Scooby. I once heard it was because Casey Kasem was returning for what would be his last appearance as Shaggy before he passed away and wanted Innes out period. This led to Frank Welker, the voice of Freddy, taking over, and given what I’ve heard of Kasem over the years I can’t confirm it but I can believe it. Innes will return before Matthew Lillard from the live-action movies took over as Shaggy but Welker still voices Scooby. Velma and Daphne have new voices from the direct-to-video movies but the art style and lighter tone of this series would go into the home video movies, for better and for worse as they’re pale imitations of the first batch of movies. Of course the ones they make now seems to only be interested in retconning every paranormal element out they can but that’s an argument for another time. Let’s get into the intro.

I’m kind of disappointed that so much of the intro is dedicated to the chase. I’d like to see them trying to solve mysteries around the chase. Yes, I know the chase scenes with music number is back, with Simple Plan (who did the intro) coming back for some of the songs and even guest-starring in an episode, but you can mix the mystery solving in there instead of shoving it into the last few seconds.

Mindy Cohn, famous for playing Natalie on The Facts Of Life, would take over as Velma and decided she should be Jewish. While there is no evidence to the contrary unlike a…certain other retcon, it mostly boiled down to her saying “oy vey” as much as she used the classic “jinkies” so I’m not sure what the point is. I’m not Jewish by birth or ancestry and I use oy vey now and then because I don’t like to swear. At any rate she’s probably my favorite Velma. The bigger change was to Shaggy thanks to Kasem insisting he join the voice actor and DJ as a vegetarian. This is Shaggy, folks. I can see him putting hamburgers and veggieburgers in the same bun…with about 15 different other foods surrounding it. This and him leaving Transformers for calling a bad Arab nation Carbombya (it’s a lame pun based on Iranian terrorists that were active in the 1980s but it’s not like we didn’t see GOOD Arabs in the previous season or in that one) plus other things I’ve hear about him make it easy to believe that he got Innes fired even if I can’t confirm it.

Freddy actually gets the worst of it though by becoming a himbo obsessed with his van, with jokes about his interest in gadgets, something Be Cool, Scooby-Doo would expand upon. Also Daphne gets into martial arts and using fashion as weapons or fingerprint checking. There’s this thought that Daphne was always the damsel in distress and this was their attempt to improve her character as if her return in the ABC years and the early home videos hadn’t already done that. The thing is she really wasn’t. Scooby-Doo, Where Are You did paint her as “Danger Prone Daphne”, and she did get captured more than the others but the others got snagged as well and Daphne is only ahead by maybe two points. Even her stumbling sometimes led to a clue and in the shows since that was toned down and she was more the cheerleader as well as part of the trio that did the lion’s share of the solving, even when it became a duo with just her and Scrappy.

I’m just sorry it altered the tone and art style of the movies, although I do understand it was easier to do it that way and brought the two media together. Otherwise despite the flaws it actually is a good incarnation of the show and the theme reflects the tone and style of the show. Besides…it’s not the next one on our list.