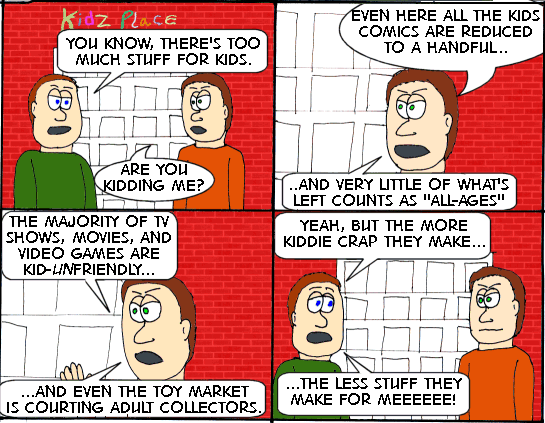 I’m sure you’ve come across a guy like this. I did at the comic store. The other guy’s opening line? That guy’s response to my complaint that the Transformers Movieverse is kid un-friendly despite being based on a kids’ toy. At that point I decided he wasn’t worth arguing with, for the reasons stated in the comic.

Nice dark lines, eh? Yeah, that’s because of this page by a fellow ShadowWing. (That’s why I added “Tronix” to my screenname, you know.) I spoke with Lady ShadowWing (no connection) before. Well, e-mailed. Nice girl, and a big Batman and Usagi Yojimbo fan, as perusing her site will tell you. She has a tutorial about how to color in Paint Shop Pro. The tutorial uses version 8 and I have version 7, but I was able to adjust. I’ll be using some of her coloring tricks in a future BW Progress report, but it’s the image prep page that made things a lot easier for me to get my dark lines than what I used last comic. Thanks to my fellow ShadowWing.

And yes, this time it’s Leon working without Jake. Maybe this is what he was doing while Jake was dealing with his fellow cartoonist? At any rate, while I have no plans to have storylines in this comic, I may try to expand the cast out a bit more, and get fresh takes on storytelling. I may even bring in characters from the Christmas special. Time will tell.