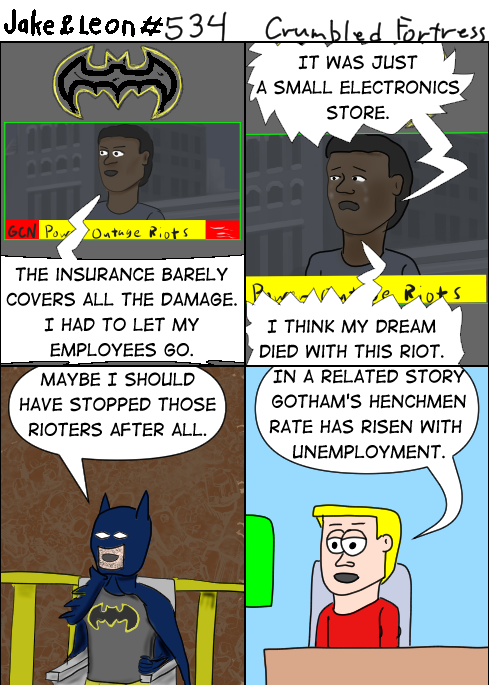 Gee, I hope there isn’t some dying security guard or cleaning person who tried to stop them.

Based on an infamous page from Batman: Fortress #1. I do understand the needing to prioritize. It’s the reason Bruce gives for not even dropping some tear gas pellets you know he has in his utility belt as he zooms by that bugs me. How does he know some security guard or cleaning person isn’t trapped in the middle of that nonsense if they’re even alive? What if insurance doesn’t cover enough to restock, repair the building, and open up in a reasonable amount of time? Is this a big chain store, a franchise that the franchisee has to put their money into or some dude opening their own store with a dream of owning his or her own business? On the next page he stops a mugging/potential rape situation, but at least call Gordon to warn him this is going on.

Also, what’s the point of stealing a TV during a blackout? You can’t use it and the way they’re acting you’d think they wouldn’t have power again. At least No Man’s Land made sense. This is just another reason to leave Gotham City.