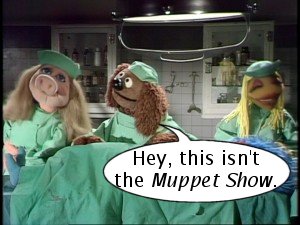 What, did you think I was kidding?

With that out of the way, let’s get into this week’s comic reviews, or “I guess I may have to start buying Previews.” Super Human Resources is not mine, since they didn’t think there would be a big call for it. Small press comics tend to be too risky for a lot of comic stores, but if enough people order through Previews, they may get more in. So while they try to get a copy for me (because my local comic store is awesome), they did get me something else. 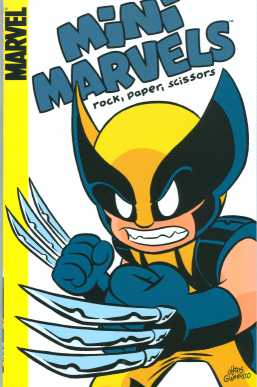 Even this Logan I barely tolerate.

I don’t want the entire Marvel Universe to be like this, but I’m glad at least one universe is. But I do have three new comics to review this week. You can check the spoiler blocked reviews at ComiXology by clicking the title in question.

CHOSEN COVER: B by Trevor Hutchinson

Note that there’s a warning on this comic, “not suggested for children under 13”. I should check the previous issues to see if this is new.

Kup tears into Ironhide for pounding into Mirage. He’s sure that Mirage is not the traitor, and Kup needs all available Autobots to survive the Swarm. Back on Earth, humanity is still being treated like playtoys by the Decepticons (irony, considering they are play toys for humans in our world), and they’re like that neighbor kid from Toy Story. On Cybertron, Perceptor is taken out by the Swarm, who now seem to be able to shoot toxic darts. The traitor is revealed in flashback to be Sunstreaker! More than a little ticked off as to what the Machination did to them, he decides to take it out on all humans, and agrees to help Starscream lead Megatron into a trap so long as all humans are killed off. (Apparently something went wrong.) Now his conscience has gotten the better of him, and he sacrifices himself to save the other Autobots. Drift, however, tells Ironhide that he thinks the Cons had even more help, and they did, as the Insecticons hold Hunter O’Nion captive and hooked up to machines.

What they got right: The age warning, for one. From the way the Reflector robots treat the humans to Hunter’s status, it’s not going well for our side. The story’s getting a lot darker, which should tick me off. However, I really can’t see any other way, and the traitor reveal is well done. And at least they wrapped up all the old questions before giving us new ones.

What they got wrong: I am, however, still not found of the darker, more violent stories, so there is that. However, that’s really it. I also don’t like Sunstreaker’s treatment thus far. It’s not something I like watching characters go through, although it’s still not as tasteless as Arcee’s being made into a forced transsexual by Furman. I also feel for poor Hunter, but at least they make me care about his fate. IDW’s Sunstreaker was a jerk before being forced into being a Headmaster, and I find it difficult to feel sorry for him, considering what’s happened to Hunter and that I would think Scorponok holds more than enough blame to extend that hatred to the Decepticons.

Recommendation: It’s not like I hated The Empire Strikes Back, even though I’m the rare person who doesn’t think it was the best of the series. (My choice is Return of the Jedi, because I prefer happy endings.) I’m hoping that All Hail Megatron is the Empire of the new direction and the next series after the Coda story shows the Autobots taking the Earth back, or at least headed in that direction.

A day out at the museum for Steven Strange, Sorcerer Supreme, and his assistant, Jason Wong, is interrupted by a fire-breathing squirrel who is in fact Dormammu, ruler of the Dark Dimension. The only way he could enter “our” dimension was in the form of a squirrel, just one of many rules forced on him by an incredibly confusing contract. Since Dormammu has his own lawyer, Doctor Strange acquires the services of Foggy Nelson to go though the contract and find a loophole that can send Dormammu back.

What they got right: I’m beginning to realize that crazy (in a good way) is typical Tobin. First we have Doctor Strange going to an art museum in full Sorcerer regalia, despite trying to keep the mystical a secret from humanity in general (for “our” own mental health). Then there’s the Ancient One’s contract, with things like being forced to enter the real world as a rodent, not casting spells if dressed as a schoolgirl, and to eat a hot dog every Wednesday. The relatively happy-go-lucky Strange from his previous Super Heroes appearance with Spider-Man is still there, even on the cover. It’s just so…ok, I’ll say it…strange! Also, nice use of Foggy Nelson, which makes me wonder if Daredevil will make an MA showing anytime soon.

What they got wrong: $4.00 for a kids-targeted book? Really, Marvel? For the story itself, nothing comes to mind.

Recommendation: I have my concerns with Doctor Strange on a number of fronts, so if they can get me to happily own a comic with the character at the forefront, it must be worth checking out at least.

Actually, this review is word for word on ComiXology’s site. There was no way I could review it without the spoilers intact and untagged.

Because of his amazing gaming skills, Flash Thompson gets to test out a brand new video game at the arcade. (Wait, there are still arcades? Really?) Unfortunately, it’s actually a killing machine using Flash to smash New York. Spidey (who can’t even play his own game) rescues him, only to find the machine is now under the control of Arcade, who fights our hero just like the “Super Spider-Hero” game (which he can’t play, but Flash can). Can Peter use the help of his greatest enemy to help Spidey against his newest threat?

What they got right: The art is certainly better  than some issues (like that terrible Christmas issue). It’s always fun to watch Peter forced to rescue Flash, but having Flash rescue Spidey is kind of funny in it’s own right. While the story can only work in the Adventureverse, that just makes the MU Proper look even more pathetic.

What they got wrong: How do you get something as almost iconic as Peter’s hairstyle wrong? It was one of the few flaws in the Fox series (that and the rather sub-par CGI for certain cityscape scenes), but here they don’t even try. And being better doesn’t mean it doesn’t have room for improvement. However, it doesn’t detract from the story. Also, having Flash rescue Spidey makes him look kind of sad, which wouldn’t be so bad if the MU Proper Spider-Writers seem to think Peter should be written as a total loser.

We pre-empt this week’s Best Scene of the Week for a very special commentary. Best Scene will return next week at this time. 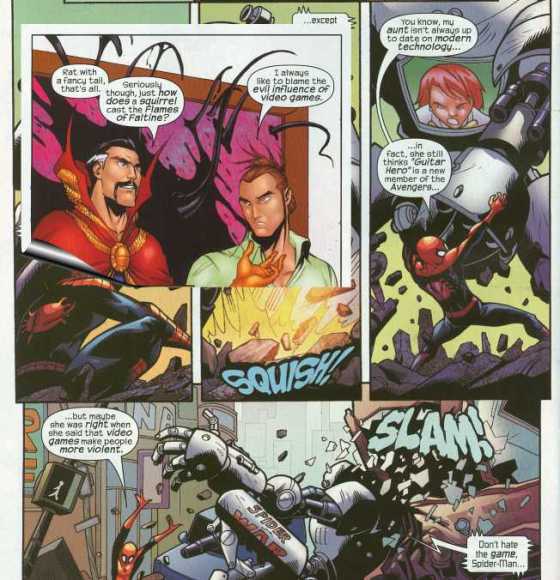 So why did both Marc Sumerak and Paul Tobin decide to take a shot at games? Were they making fun of video game critics, or…

A game taking place during Marvel’s Civil War disaster? Hmm….maybe they have a point. I’ll have to think about that as we wait for next week’s installment.