So the news about the “Land of the Lost” movie isn’t good. They pretty much did what Battlestar Galactica did: slaps old names on new characters, only instead of a dark war story, they went with making a Will Ferrell movie. Not even one of his kid movies (or a very good one, based on some of the reviews I’ve seen), which considering the movie is based on a Sid and Marty Krofft kids show is just terrible.

Apparently, Rick Marshall is now a slightly off-kilter paleontologist, Holly is now his assistant (and I’m betting would-be love interest, based on how these things go), and Will is some guy who gets sucked in on the adventure. I can only guess what happened to Cha-Ka the monkey-kid. Those of you who grew up on the old series may not like what’s been done.

I, on the other hand, saw very few episodes of the series, mixed in syndication with other Krofft shows. Mostly I recall Wacked-Out Space Nuts and H.R. Puffinstuff, but I’m sure there were some others, which I don’t actually recall seeing until TV Land tried to make a Saturday Morning programming block featuring old kids shows. Most of the old Land of the Lost episodes I’ve seen was just recently on Sci-Fi, and I may well track it down on DVD (Target had a three-pack of all the episodes.)

No, my first major introduction to the land of three moons and lots of dinos and Sleestaks was a remake by ABC in the 1990’s, featuring a different family, “updated” Sleestaks, but the same old stop-motion thunder lizards (or birds, although I kind of doubt that recent theory). However, while I really wanted to show you an episode of this series, it’s tough enough to track down the old one online through the legit sources. (Krofft does have their own MySpace page and you can find some of the episodes on Hulu, but the 90’s series gets little love.) Thus, I’ve had to break my rules this once and went to a fan-posting, to give you an idea what the new show was like.

Instead of the Marshall family, we have the Porters; Tom, Kevin, and Annie. Instead of taking a canoe down the rapids during an earthquake, we have their “truck” (much like how KITT in the original Knight Rider was referred to as a “T-Top”) being swallowed up and exiting a cave. A number of other changes as well, and I chose this episode mostly because it introduces you rather nicely to the whole cast, including the “new” versions of the Sleestaks.

Yeah, that’d be my reaction, too.

But first let’s meet the new humans on the block. We still end up with father, son, and daughter (later episodes tells us that Natasha Porter, their mom, was killed in a car accident). Only this time our heroes get to bring a few mementos from home. (And yes, an explanation does come for how the truck and all the battery-powered stuff work when the batteries and gas tank all run dry.) Kevin and Annie don’t argue as much as Will and Holly did (as I noticed during the Sci-Fi marathon Memorial Day), but they still fight like brother and sister. Kevin is a bit of a wiseacre, and pulls a few pranks on the more thoughtful Annie. Tom is still the head of the family, and holds everyone together as they try to get through the Land of the Lost together.

One thing different between the Porters’ experience compared to the Marshalls’ isn’t just that the Porters brought a few more gadgets with them. Instead of hiding in a cave or abandoned temple, the new family actually builds a house on stilts in the middle of the jungle. Why on stilts? I’m not sure. They’re nowhere near the ocean, although I suppose it makes it more difficult to be stepped on by giant dinosaurs. 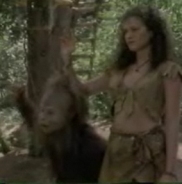 Guess which one Kevin was ga-ga for?

They also make some new friends. While the Marshall clan made a couple of friends among the Sleestak, the Porters find another lost refugee from their world, Christa, and her friend Stink. Stink is a Pakuni, like Cha-Ka in the old series, but here he’s the last. As we learn this episode, the Sleestak imprisoned and it seems ate his family and friends. Now if you believe Wikipedia, which does occasionally print rumors like they were facts, these roles were supposed to be filled by Holly Marshall and Cha-Ka, but due to casting issues, we instead get a woman who lived her whole life in the Land as she and her parents arrived when she was a baby. They were helped to (hopefully) escapes with the help of a fish man named Namaki (interestingly played by the same guy who plays Shung in the series), who later befriends the Porters as well. During the escape attempt, there was a huge storm and Christa ended up on another beach, where she was found by the Pakuni.

It’s so dark in here I need a flashlight to find my flashlight.

I chose this episode because it introduced the new Sleestak; Shung, Nim, and Keeg. In this version, the Sleestak went underground after nearly polluting themselves out of existance. Shung and his crew, however, are criminals (for a race that enslaved and ate the Pakuni, that says a lot) and were forced to stay on the surface to die. Instead, they continue to live. Shung has mastered the use of the crystals, but now needs their power to survive. In one episode, Annie also learns to tap their power and nearly becomes corrupted by it. They seem to be different from the crystals that power the matrix table pylons in the original series.

Our new heroes have their own dinosaur friends and enemies as well. Tasha (named after the late Mrs. Porter) was found by the family in an early episode, and Annie has taken her as a pet. Unlike “Dopey”, Holly’s pet brontosaurus, Tasha’s species isn’t determined, but she is a herbavore. This is the only dino done in a costume rather than the classic stop-motion + puppets. There’s also “Princess” named (unconsciously) for Christa’s dog back home. Christa and Stink ride the triceratops like a horse. There’s only one constant foe for the Porters from the dinosaur world, the T-Rex dubbed “Scarface”. Unlike the classic Sleestaks, the new ones don’t keep a “guard dino” around.

Although it only lasted two seasons to the original’s three, the updated Land of the Lost was still as amazing a show. Although the Porters never stumbled upon the secrets that the Marshalls did (no weather-controlling Pylons), they still had their fare share of adventures, other visitors (magic users and kids from the future and the like), and still ran from dinosaurs while trying to find their way home. If they ever do release this series on DVD like they have the original, it would be in your best entertainment interest to pick it up and give it a try.

ADD: Apparently, there’s going to be a comic based on the classic series.

Posted by ShadowWing Tronix on June 6, 2009 in Saturday Night Showcase and tagged Land of the Lost.