Remember when he used to FIGHT communists?

After a visit with the Illuminati to set the time period (that being during Tony’s second fall into alcoholism and Stane taking over Stark Industries), we see Tony being bothered by another homeless man, who seems a bit out of his mind. But just because your paranoid doesn’t mean a supervillain isn’t out to kill him. Tony rescues him as Iron Man and then takes him to his sister’s place. Then someone tries to take the golf clubs he hides his older armor in, and gets blasted with an energy gun. This area of LA is controlled by a group called “the Pride” and they’re out to eliminate Tony Stark!

What they got right: Now we’re getting a bit more Van Lente out of this comic. It doesn’t have the craziness from, say, his Hercules stories, but the fun moments are in there. The art is well done.

What they got wrong: The colors, however, are too dark for my personal taste. Also, after the last arc I wish he didn’t decide to delve into the “Demon in a Bottle” timeframe. Van Lente’s humor is still sneaking through, but it’s one of the darkest moments in Stark’s life, and not a period that needs to be “revisited”. The original story stands up just fine on its own.

Recommendation: This is what I wished the last arc was, and I find myself looking forward to more issues again. 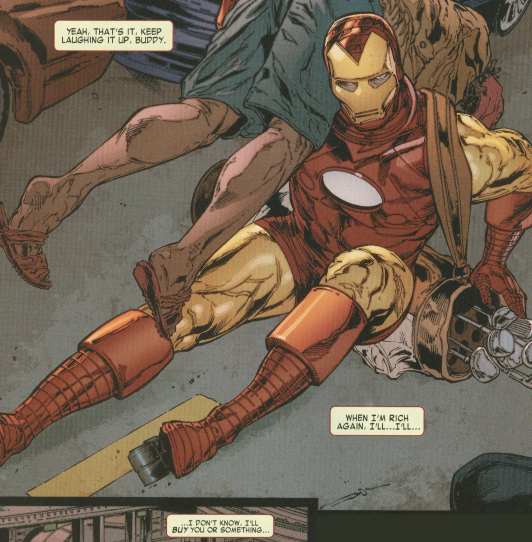 I hear you can get a good deal on jerk motorists on eBay, Tony.