Ladies, gentlemen, and the undecided, this is Simon Furman. He’s a comic writer. His work has included two of my favorite fictions, Doctor Who and the Transformers. I haven’t been privy to his travels with the Doctor, but I know about his days on Cybertron all too well.

This may be surprising to some. Somehow, Mr. Furman has taken over the Transformers universe, at least until recently, when IDW decided to go a new direction with their current G1 Universe. He’s still writing Transformer stories, and still getting more praise than Bob Budiansky, the guy who was brought in to create the fiction around the toyline.

But at least Hasbro knew who to induct into the Hall of Fame first!

When Bob left because he was fatigued (it’s not easy writing stories around whatever toy Hasbro wanted to push), Furman, who had been writing for the UK version, was brought in for the regular series. Oddly, nobody seemed to mind that Furman was not only bringing back characters without a selling toy, but regular characters that were never getting a toy.

He also brought along elements that I never really cared for. So as part of the Spotlight’s goals of giving my future readers an idea about what I plan to write about as well as find like-minded people, I decided to create a series of article about what it is about Furman’s Transformers stories that drive me up the wall. Welcome to…

This edition is just a brief overview of what is to come, as I break down the faults I find with Furman’s stories. One of two things to remember is that the UK version reprinted US stories and brought other writers to fill in the time. Furman would eventually become the main writer to cover those areas, since the US version was monthly and the UK version weekly. So he took the time to expand on the characters, although not keeping up to date with Budiansky’s plans. (This was pre-email, with very expensive phone rates internationally.)

The other is that Furman decided to add the Movie adaptation as the actual future of the comicverse, despite that movie being set in the cartoon universe. I think someone told me that the UK didn’t get the cartoon or something like that, but I could be wrong. So I don’t necessarily hold these things against him, and I’ve read few of the UK comics. I’m focused completely on his US run, and things that bothered me. Things like…

The Creation Matrix of Leadership

"Look what I picked up at Spencer's Gifts."

In issue #5, Budiansky introduced the “Creation Matrix”, a computer program, as Shockwave referred to it, that could create new Transformer life. This was before the Movie would introduce “The Matrix of Leadership” and Beast Wars would introduce the concept of the “Spark”, a ball of energy (for lack of a better term) that’s officially recognized in further timelines as the source of a Transformer being more than an advanced AI mechanoid.

Furman, however, decided that with the Movie as his canon in the UK that the Creation Matrix would in fact match the Matrix of Leadership. (This would include the look of the thing, as seen in the comic adaptation. It’s possible that the adaptation artist didn’t have a finished model of the Matrix as seen in the Movie and we ended up with the glowing crystal thing.) This was fine for the UK stories, even if it wasn’t how the Creation Matrix was depicted and the US stories are supposed to be canon in the UK. However, once the idea came here, I got annoyed. This will be the first article, where I’ll expand on why.

"And which one of you took down Megatron? Twice!?"

When it comes to Furman there are two kinds of pet characters, the beloved and the mistreated. Furman’s version of Grimlock and Galvatron, for example, are not only different from previous versions, but Grimlock can do no wrong and Galvatron is too uber-powerful and too stark raving mad unless Furman needs him to be a genius. His Unicron…is actually used rather well, but I also have problems with the origin story and religious aspects of his stories that I will also be taking a look at.

On the flip side, logical Prowl is an emotional mess, Prime devolves into a wuss, and Arcee…oh, you’ll have to wait to see the horrors fostered on poor Arcee, but it’s one a sector of Transformers fans (or “TransFans”) will follow him on. That really is an article in itself and one where Furman will get no defense from me.Too many storylines!

This is mostly true of his later works, where Furman decides to have too much going on at the same time. Something like three or four different stories were happening in the early days of his IDW run, and it really bothered me. Eventually he would focus on one story at a time, but that meant that the other stories were in limbo until he got there. This is not good storytelling. 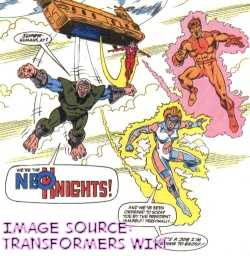 On the plus side, no Wolverine.

He actually had some help in this bit of fail and for the life of me I can’t understand most of the praise this series gets.

So did he do anything right, Tronix?

Why, yes he has. However, this is in the minority which makes the above stand out even more. When he wasn’t buried in plot threads and pseudo-religion, he can actually tell a darn good story. The final article in the series will most definitely cover this, because I like to end on a happy note.

So that’s what we have to look forward to in this series. I’m going to try to be as fair to Simon Furman as I can, because he’s not all bad and a decent guy from what I hear. On the other hand, I have to call him out on this stuff. Some of it doesn’t work for me, and some of it doesn’t work at all.