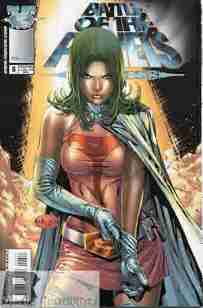 Too scared to even make a joke here.

Battle of the Planets: Princess #6

With an assist topside, Mark & Princess rescue Keyop and the other children. Red Impulse finally gets to blow up some giant bugs. Working with the team again makes Princess realize this is her place, her home…and her family.

What they got right: There’s not much to say because this is the all-action finale and action there is–and well-done at that.

What they got wrong: Now that they’re both a bit more calm, I would have liked to have seen Mark and Princess talk out their issues and build that bond. But this works, too.

Recommendation: This is the last of the Top Cow-produced BOTP comics, and all of them (although I didn’t read the Witchblade crossover, so I can’t really judge that one) are well written and drawn. I still say that without Zark and traveling into space and all that Sandy Frank added to the series it’s just Science Ninja Team Gatchaman using the BOTP names. It could have easily been G-Force: Guardians of Space or Eagle Riders, the other two adaptations of Gatchaman. However, it was a fantastic series that I wish had continued. I give all of them, including this mini, my highest recommendations.