OK, in my defense October was a bit nuts for me. A planned vacation after some bonus work hours was interrupted by a Crohn’s flare-up. Also, I never seem to write down the J&L or BW anniversaries. Reviewers Unknown also has a second year anniversary this month. I’m thinking I should have waited a week or two before starting the strip. Maybe I wouldn’t forget so much. What’s done is done.

So another year of me making mildly amusing (on occasion) commentaries on the entertainment industry and its fans, plus the occasional parody. It’s time to step back and pick out what I think was the best of my time-waster this round. Get ready for a lot of images. 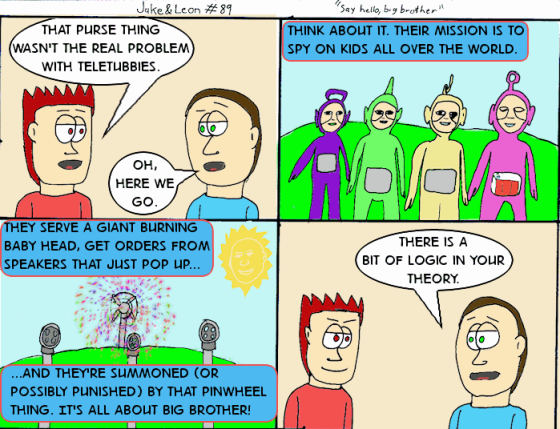 This might be one of those “I needed something for a strip” things and the show isn’t even on the air, but it’s always been in the back of my head and I wanted to get it out. Win/Win for me. 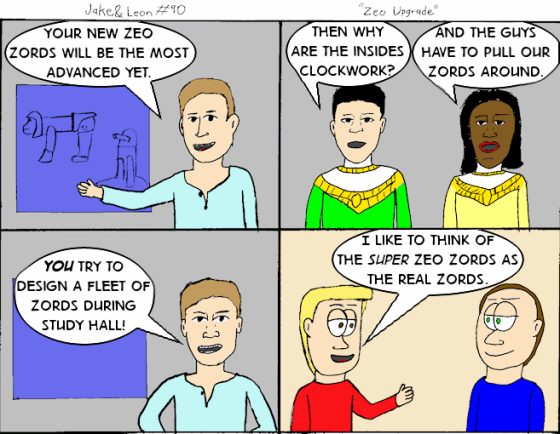 On top of 50 billion other things the Rangers do with their spare time.

I do enjoy the Power Ranger Parody run. I’m still finalizing an idea for the Lost Galaxy. Do I want to make fun of the Galactabeasts/Galactazord or the fact that we never even hear of a “lost galaxy” until around 3/4s through the series?

Lucky for people on France there are no turkeys.

I don’t get to play enough with Fizzbin’s being a space alien. Yes, the J&L universe has no superheroes, but it has space women.

Is figgy pudding even that good it requires you to demand it?

Part of the “Fizzbin Learns About Christmas” storyline (because who says I can’t do one, especially after “Marvel War”), it’s something I’ve wondered about this song. You wonder if they really would never leave unless they got their pudding? Like five months later they’re still sitting there waiting for their pudding.

This has nothing to do with my cousin.

It’s rare that I feel the need to research a Jake & Leon strip since I (hopefully) already know what I’m talking about. In this case, though I wanted to make sure that myrrh was being spelled right and also to see if it was an embalming fluid. It’s actually some kind of perfume that was used for embalming but also for other things in other countries. I got learned by my own strip. 😀

I’m not sure that I got the Mayan skin color right.

Some have said that the Mayan calendar actually starts over in 2012 and not that the Mayans predicted the end of the world. Even if they had, do we know they’re right?

At least we have cool new logos. Oh, wait…

The first commentary gag of the cycle. Three versions of Superman, Green Lantern, and Batman. Just kept getting worse and worse.

You think that’s bad, wait until the Commando remake.

Sometimes you have to make fun of the fans, too. Or at least writers, editor, directors, and producers keep telling us people want realism and none of that silly stuff. Then explain much of Sam Rami’s career? 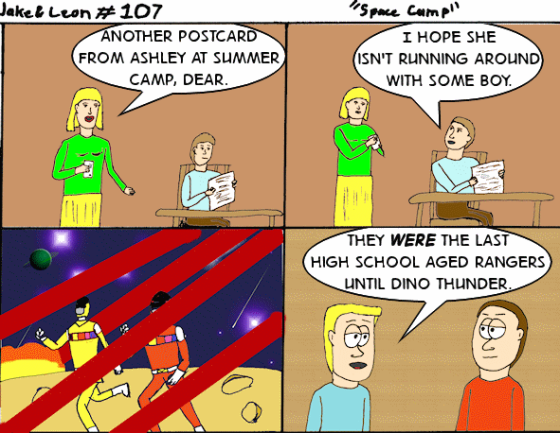 Sadly this is the last time I can make fun of Angel Grove.

I do wonder where the Dino Thunder kids’ parents were (except for Trent’s of course) but somehow it didn’t seem as odd as it did for the Mighty Morphers (you’d think they’d attend at least one of their kids events) or the Space Rangers (who were in space at the time).

I’m just wondering how he does that.

Unless I’ve changed the theme again you can see right on this page what I’m talking about. I made the comics clickable in part so you can see the full-size comic and be able to read it. (It also leads to me talking about making the strip if you’re interested.) I decided a “test run” of the new orientation and I think I made the right choice. Plus if I do something like Marvel War again this layout will look somewhat more like a comic book page but still works as a comic strip page normally. 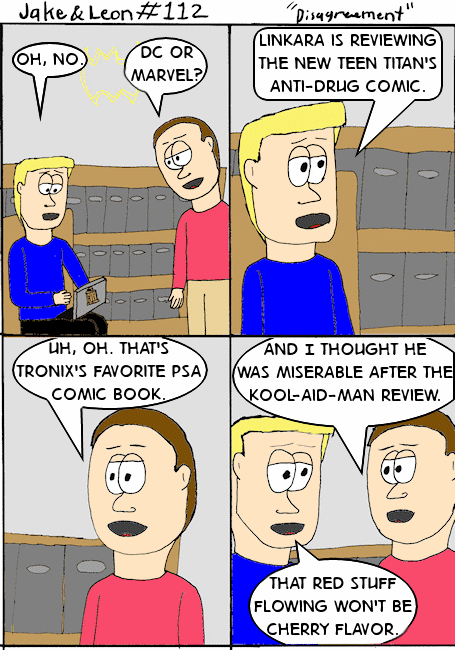 No, it will be cherry flavored. I’m really that clumsy.

I don’t have any evidence that Linkara has ever read the sight beyond my old Internet Spotlight of Atop The Fourth Wall way back in the early days of the Spotlight. I assume he still knows I post his older History of Power Rangers along with my own thoughts. But yeah, we disagree about The Adventures of Kool-Aid Man but he was fair to the Teen Titans anti-drug PSA so we didn’t have to have words. 🙂 I also like the new reading room set I made and that “DC or Marvel” line shows up again in another comic. May become a running gag even if they’re not talking about a comic book. 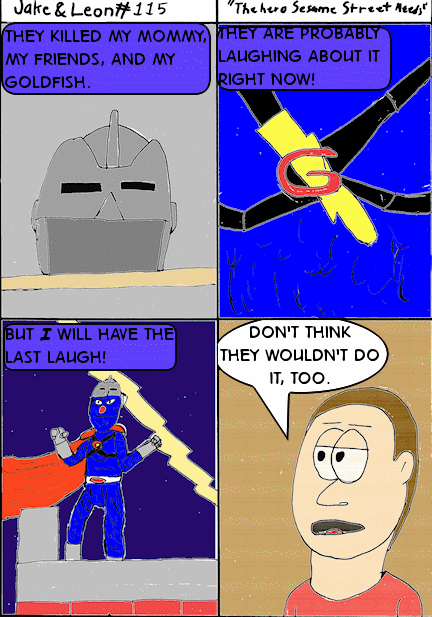 It’s sad that this is the first time I drew Super Grover. Still, I think I made my point pretty well here. This “tragic origin” stuff is getting out of control.

And as a kid you probably would have watched it.

I should note that new RU colleague Rowdy C. Moore once did a rant on the Hanna-Barbera Godzilla cartoon. When that finally gets posted to the site I’m going to have to make a counter point. I sadly will have to write an article since I won’t have time to make a video thanks to my backlog of con footage but a reply will be made.

Say it with me now: “JOOOOOOHNS!”

I imagine Leon being portrayed here this time by another RU colleague, Witrzblok. Granted, this ticks me off as well.

He had to learn somewhere, right?

For some reason I was thinking about this meme, the web comic it comes from, and the Batman/Space Ghost team-up on TV and this comic just came together.

October 25th is Jake & Leon‘s anniversary, and that’s all the strips from October 25th, 2011 through October 25th 2012. And there’s more to come, plus new features like Captain PSA: Public Service Announcer. But Jake, Leon, and their friends aren’t just a fun article; they’re a part of the BW Media Spotlight experience, which is why they have their own archive page and appear in the site logo. I hope to get better and do some other kinds of comics in the future, so we’ll see where we are next year.

Speaking of which I better get ready for BW’s anniversary.