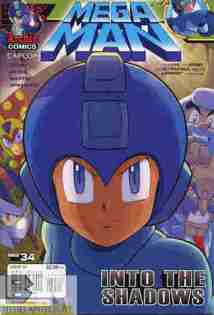 It looks like Dr. Light is massaging Wily’s scalp. Click to enlarge the pic and see for yourself.

The main story has Mega Man, Roll, Rush, Pharaoh Man, Plant Man, and their creators looking into Ra Moon and Dr. Wily’s part in his actions. Meanwhile, the Wily bots recruit Shadow Man the hard way (for them, not for Shadow Man), and Break Man, seeking personal answers, pays a visit to Quake Woman.

What they got right: Is there a bit of Proto Man still in Break Man? Also, I like seeing how shaken up Mega Man is, not because I like seeing heroes tortured. Anybody who has read this site long enough knows the reverse is true. I like that he still has things to overcome but still finds the courage to do what he needs to no matter how scared he is. That’s a good lesson.

What they got wrong: Shadow Man is awesome and needs to turn good and go on secret evil fighting missions as a personal penance mission. He’s too cool to be evil, I don’t care what the games call for. (At least after the Mega Man 3 adaptation finally happens.)

The short back up is a prelude to an intended spinoff with Mega Man X. (I hope they have better luck with that than Dreamwave had.) Dr. Cain finds X’s capsule in one of the late Dr. Light’s old labs. Proving his advanced robot is good, Cain uses him to build other robots he dubs reploids. That’s pretty much it.

There isn’t much to say here since it’s short and just setup for what’s to come. The art is good and I do want to see where they’re going to go with the story.

Recommendation: If you’re not reading this comic yet, you darn well should be. 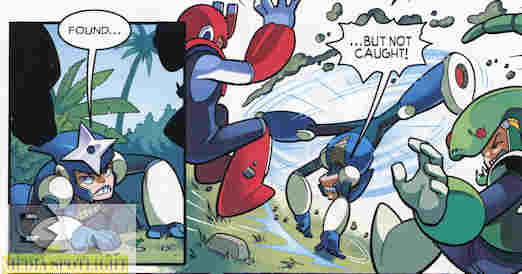 See? Too awesome to be evil.