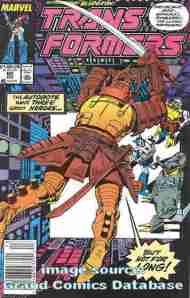 Ceiling Bludgeon…will stab you in your sleep.

Distraught by Ratchet’s apparent death, Optimus Prime considers giving up as losing his friend was the last straw. Hot Rod comes up with a plan to bring him back by faking an assault droid going haywire…except it actually does go haywire, which at least achieves the desired result. Back on Cybertron, the Classic Pretenders have boosted Autobot morale, but new Cybertronian Decepticon leader Thunderwing sends his “Mayhem Attack Squad”–Bludgeon, Octopunch, and Stranglehold–to attack them as they go to leave, with the transwarp portal taking all of them not to Earth but deep within Cybertron itself, where the Autobots come face-to-face with their “god”, Primus!

There’s not much “right” with this although it is readable and interesting. I’m going to combine “wrong” with “other notes” to explains my problems with this comic. I don’t have a problem with Optimus having a momentary crisis of faith in the cause. What I have a problem with is that despite Optimus being the same fighter he always was this begins Furman’s weakening of Optimus, making him indecisive, always doubting himself and the visions he’ll start having, and being called out by his solders, especially Kup, in the future. I hate what Furman did to Optimus but I’m waiting for a particular issue before putting together a “Furman Files” article about it.

I’d also like to know how Thunderwing, Bludgeon, Octopunch, and Stranglehold have Pretender shells. Is this so Furman can ignore transforming as much as possible? The Pretenders have a definite origin. Scorponok created them the so some of his troops wouldn’t immediately be aware they were under attack by robots and virtual Optimus used them in an attempt to disguise his troops from the Decepticons. Megatron used it as a way to repair Starscream, a process he needed Ratchet to complete and the Autobot used it to repair his friends. What was the point of Thunderwing’s crew having Pretender shells in-story? Why only these four? Is that why they know about Megatron, that they were early test subjects? There is no explanation. Ever.

Finally, there’s the introduction of Primus. It might have been better had the Transformers never been aware of him and learn later that they have a progenitor. Early issues always suggested they were unaware of their origins and the first issue blamed it on naturally occurring mechanical mechanisms. I don’t have a problem with them having a creator but it’s the way he’s introduced. Xxaron (which ignores Transformer naming culture while making his US debut here) just out of the blue mentions Primus and Bumblebee is all “hey, I forgot we had a god”…just as we begin a story introducing a god that’s never seen as part of Transformer culture (what little we ever get to see) until just a few pages before his introduction. Like I said, it would have been better to have them completely clueless and only know the term “god” from being on Earth.

Recommendation: An easily ignored story unless you want to know how these characters met Primus, the next issue being very important to continuity.