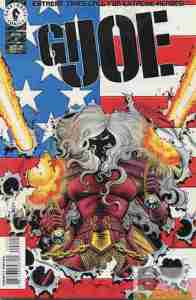 Look hard and see how impossible that shooting angle is.

The Joes (after getting their weapons) and SKAR pair up at three locations. One is to go to one of the councilors to find out why they voted against them, but Red Scream has him killed. However, he mentions the code “Doppleganger” before he dies. The second team head for scene of the attack, hoping to prove the Joes innocent (but Rampage betrays the Joes for money forcing them to escape). The final team heads to the mainframe of the Alliance to learn more about “Doppleganger”, but the files are destroyed by Red Scream, who turns out to be the agent that arrested the Joes originally. Stone and Iron Klaw escape thanks to Stone’s former commander, who turns out to be “GI Joe” from the last miniseries (as suspected). As the three teams reconnect they have company…Red Scream’s fake Joes!

What they got right: I kind of like that Red Scream is better at Iron Klaw’s secret identity thing than Iron Klaw. Instead of taking over an allied country, Red Scream is in the Alliance military itself, giving her an advantage. I also easily believe Rampage would sell people out for money, and it’s funny watching him pay to not be left behind.

What they got wrong: Red Scream’s reveal might be a bit early in the storyline. Or maybe I just watched too many Scooby-Doo cartoons as a kid and wanted the reveal to come to the audience when she’s unmasked, as she probably will be by the end.

Recommendation: I’m still enjoying the story, and it’s one I would recommend to anyone who wanted the series to be better than the cartoon was. I haven’t seen the toys in years since I didn’t care so I can’t comment on them.