“Yesterday’s” Comic> The Legend Of Zelda #2 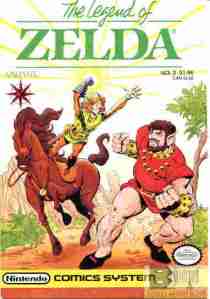 Link broke his leg when it caught the horse.

The Legend Of Zelda #2

Impa tells Link and Zelda that if Link leaves the North Palace (I don’t remember if the cartoon named it, so bonus to the comic for using the game name) Ganon will conquer Hyrule. Zelda forbids Link from leaving no matter what, Ganon pulls out every trick in the book to trick him into leaving. They all fail because Link keeps his promise, even when he’s tricked into thinking that Zelda was taken prisoner and put back under the sleeping spell…until Ganon makes one minor slip-up that Link catches him in. It seems this is the one time when Ganon’s Wizrobes can collect all the evil power together into one blast that can kill Link (I guess through the Triforce Of Courage, as we’ll see in a later comic) but instead Ganon, fleeing the Palace disguised as Link, gets hit instead. This was a very good story.

And the second one, while not bad, just doesn’t compare. Bagu, who Link met on his second quest against Ganon, comes for a visit the same time as a thief tries to make off with the Triforce of Wisdom. Link trusts Bagu, who turns out to be the thief, tricked into thinking it’s just a jewel of Zelda’s but is ransom for his giant frog pets. Link gets smart while honestly confronting him but Bagu talks him into borrowing Link’s power-boosting “handy glove” to rescue his frogs and this time is true to his word. Like I said, it’s not a bad story but compared to “He Also Serves…” it just doesn’t hold up as well and Bagu leaves Link there for hours waiting for his return, thinking he was tricked again. It doesn’t warm me to Bagu at all.

Overall, it’s worth it for the first story and the second isn’t a deal breaker. It’s another one to check out.