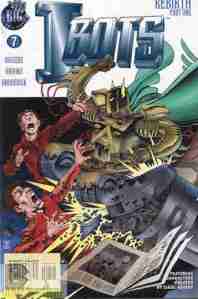 They take littering seriously in this city.

During a bridge rescue a small robot made contact with Psy-4 just as the bridge collapsed on it. Somehow this gave him sentience. When the I-Bots were killed he decided to fight crime. Then Worldtech unveils a new generation of I-Bots superheroes. When “Bot-I” (as last issue’s preview of this one called him) tries to investigate he gives himself away, drawing for himself the attention of the new I-Bots…and Annabelle?

Said new I-Bots are Heavyweight (who can make things light or heavy, Send (teleporation), A-V-N (heightened senses plus wings to fly with), Gremlin (not sure what her power is…invisibility or intangibility maybe), and Accel (can store and redirect kinetic energy).

What they got right: Biggers and Brooks isn’t just dropping their I-Bots in to replace the ones we’ve seen the past two volumes. There’s a mystery surrounding them. I also like Bot-I, a regular robot who is now in some form alive and trying to be a superhero. It’s a fun idea that knows when to be serious and I want to see where this goes. I also like the character designs and powers for the new I-Bots.

What they got wrong: An overload and somehow Psy-4 making a mental link with him called Bot-I to gain sentience. Works about as well as Short Circuit‘s Johnny 5 I guess, but it still seems like a stretch.

Recommendation: Thus far Biggers and Brooks seem to be off to a good start as the new writers on this comic. Pick it up if you find it.