Chapter By Chapter> Star Wars: Shadows Of The Empire ch. 16 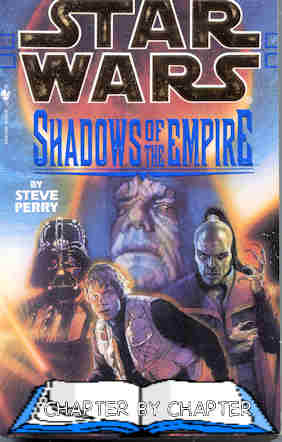 In our last installment Luke gained an ally against the bounty on his head while Xizor manipulated Vader. Let’s see what our trio is up to this chapter.

The first scene involves Luke and Dash discussing the bounty hunters as well as Leia meeting up with Black Sun. If not for the arrival of a messenger droid (they have droids for everything, don’t they?) there wouldn’t be much to this chapter that we didn’t already know. However, it’s a discussion that makes sense as they try to decide what to do next, so I’ll give it a pass.

Xizor comes up in the next spot, with a computer slurring his name because it’s breaking down, which the Prince takes in his usual posh manner. Vader has returned according to his spy but Xizor decides to wait before seeing him considering he knows Vader knows he was played. That’s a good way to get Force Choked and Xizor may be posh and stuck-up and full of himself but he isn’t stupid. Except for the whole underestimating Leia part. He goes into thinking about how he will manipulate her into bed and goes on about mammals being consumed by passion because they’re warm-blooded while the Faleen are cold-blooded and keeps cool in all things. (I remind you that his species is a bit on the lizard side. I’d say without the fake human skin like in V but in the comics his decedent did just that.) Then again, he’s talking about Vader and anger keeps a Sith powerful. That’s hardly a good example.

Vader’s segment is even less important than Luke and Dash’s. He sees a recording of Xizor’s spy using a camera hidden on a street-cleaning droid. (Like I said, a droid for everything.) Then he just thinks to himself about how he hates manipulation and espionage, since he’s a warrior. Trying to connect this to the prequels that came out well after this book it still works. Anakin led armies during the Clone Wars. It makes sense that he sees himself as a warrior, which may not be Jedi (as Yoda put it, wars do not make one great) but it shows how far the Sith way has taken hold on him. That’s all this scene has and he’s already shown his distaste for the skulduggery in previous chapters.

The final scene of this chapter returns to Luke, Dash, Artoo, and the messenger droid. After guessing the password on the third try (not Luke or Han but Alderaan–rhyme not intended) it turns out to be a message for Leia from a Bothan spy that Dash claims doesn’t have a Bothan name. Anybody who has seen Return Of The Jedi already knows where this is going. (However, as per the rules of Chapter By Chapter, please don’t ruin it for anyone else in the comments. I have a format here as well as access to erase words or entire posts. I’d rather not waste time doing that.) It’s faster for Luke and Dash to go themselves rather than go pick up Leia first and they are on a tight deadline to meet with the spy and get this supposedly vital information. I can only assume this will happen next chapter.

Overall this chapter was weak and only partially necessary until the arrival of the messenger droid. We didn’t learn anything else new other than Luke still doesn’t know he’s attracted to his sister, Xizor is a manipulative sleezebag in royal trappings, and Vader likes to fight and is looking for proof Xizor is a concern for the Empire and not an ally. We’ll see where this goes next time.