For those of you who have never seen a Mighty Mouse cartoon (I pity you), the character was created for Terrytoons (but NOT by Paul Terry) and is a Superman parody about a mouse with superpowers who protects mice from cats and sheep from wolves, and things like that. Over the years things became more anthropomorphic in nature with recurring villain Oil Can Harry, the city of Terrytown/Mouseville for Mighty Mouse to defend, and Mighty’s girlfriend Pearl Pureheart (obvious Lois Lane stand in). This particular comic series is closer the more recent (as in why aren’t there more) cartoons from the late 80s/early 90s from Ralph Bakshi, a rare example of trying to make kid-friendly cartoons since the days he worked on Mighty Mouse for Terrytoons. It’s debatable. I wasn’t a fan, but elements like a larger rogues gallery and a secret identity (made even closer to Superman’s Clark Kent in this comic than Bakshi’s factory worker Mike Mouse). I’m not a fan of Bakshi’s style in general. 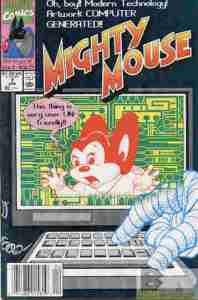 At this point I wish there was a good Mighty Mouse video game I could play.

Well, we’re off to a bad start. I guess I couldn’t hope for every comic to be good my first week back to comics. Mighty Mouse goes to the rehab center where his friend Scrappy (from the Bakshi cartoon) is dealing with video game addiction. (See issue #2 for the full details.) There he visits the computer room but is computer illiterate–at least until he’s sucked into the computer to fight a worm out to destroy the network. This whole story is full of bad computer puns, leaps of “computers don’t work that way”, and computer terms thrown willy nilly even when it isn’t a lame pun. I’m sorry this is the comic I came back on because I usually like this series. At least until Bat-Bat takes over half the comic.

Yes, Bat-Bat, a (like I need to tell you) Batman parody, also from Bakshi’s show. So after a brief Q&A segment involving a previous DC parody called “Mices On Infinite Earth” (still not explaining the lack of Spider-Ham–this is a Marvel comic, how do you screw that up?) from issues #4 and #5, we get a parody of Batman’s origin, and I’m starting to guess why Gallagher wanted to build off Bakshi; it’s the easiest way to get all the DC parodying he wants. Too bad Bat-Bat is so lame it hurts. It’s usually dumb puns and this is no exception.

Since Bruce Vein’s first year is as a baby we jump to when he turns 18. He and his parents are flying home (because they’re anthropomorphic bats) after securing a licensing deal that will make them rich, when a strange smoke jams their radar sense and causes them to crash. Martha cushions the blow for Bruce, but she and Martha are killed on impact (and very poorly buried). When he learns it might have been murder from the vote-seeking future Commissioner Gorgon (who has not appeared in ANY Bat-Bat comic story to this point, although he might have been from the cartoon and I refuse to remember), he decides to become the superhero Bat-Bat. But a knock at the door brings his future sidekick, Tick the Bug Wonder. There, I told you the story, so you can just ignore the terrible puns that ravage this story. At least the art matches Bakshi’s style for the cartoon, so there’s that.

Actually, avoid the whole issue. I’d hate to think that Gallagher actually lost the ability to tell good stories here than he did the ALF comics when he claims to be a huge Mighty Mouse fan since childhood. And some of the earlier issues weren’t bad. This was a terrible issue. If you want to see how Mighty Mouse translated to comics do NOT start with this issue. Go through my other Mighty Mouse comic reviews, including one from Spotlight Comics (no connection) and pass on this unless you really need to have all Mighty Mouse comics like I do.