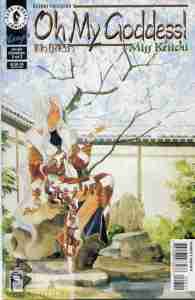 “Funny, this was a pine tree yesterday.”

There are two reasons Urd can’t turn Keiichi’s upper half back into a dude. She’s having trouble figuring out what he took trying to help Belldandy and her jealous ex-boyfriend Troubadour (who is a troubadour), the spirit of the plum tree, has appeared hoping to woo her back. However she wants nothing to do with him, and since he’s hanging around insisting Kei has to keep being a half-girl or the jealous spirit will have him exploding with bugs. He does find out (half-girl remember) and almost does pull his bug trick until Urd smacks him one. While they’re talking Urd finds out she kept a gift she gave him when they were dating and is moved to tears…which is what Troubadour was really after, since the love tear of a goddess is needed to unlock a scroll to summon a magic bird that’s part of his initiation. Mad at first, Urd forgives him so he can pursue his dream of musical greatness. NOW can she cure Keiichi of having breasts?

It’s the cute moments that make this story work, although there aren’t enough of them. Troubadour isn’t a very interesting character, but he does allow us to learn a bit more about Urd’s past. There’s not really a whole lot to say about this issue. It wasn’t bad, but it wasn’t as good as the previous issues I’ve reviewed. It was okay at best. I’ve been wondering why I stopped picking up this series (next week is something connected to this series before we say goodbye to the goddesses) and I can only imagine that was just different enough from the show I had seen that I couldn’t fit it into my budget. It’s 2017 as I write this so knowing what was going through my head in 1998 is not easy.

Still, if someone were to ask me if they should look at this series and I thought it was something they might like (if they’re into horror or giant robots exclusively from Japan maybe not…but I was surprised how much I enjoyed the first anime based on this manga series) I’d tell them to definitely give it a read, or maybe even consider it if they usually wouldn’t be. They’re good character and fun stories and it might win them over like it did me.