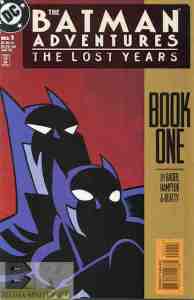 “How do you do that without white coatings over your mask eyes like I have?” “A girl needs her secrets.”

The Batman Adventures: The Lost Years #1

This miniseries bridges the gap and explains the changes between the last Fox Kids series, The Adventures Of Batman & Robin, and the Kids WB version as part of The New Batman/Superman Adventures. According to the DC Animated wiki this is an extension of the episode “Old Wounds”, as it delves further into Robin’s transition to Nightwing but this also includes the introduction of Batgirl onto the team officially and later we’ll see the DCAU origin of Tim Drake’s Robin.

As our story opens Robin (currently Dick Grayson) is feeling unappreciated by Batman, like he doesn’t trust him anymore, while Batgirl is earning more trust despite not knowing who she is. Bruce later figures it out thanks to a series of coincidences in both identities. When Bruce fails to show up at Dick’s graduation and then ruins his date with Barbara to help track down the Joker, he’s even more upset. What finally gets him is when Batman tortures a thug for information (it turns out he doesn’t have) in front of his wife and young son. Robin leaves just as Batgirl arrives. Barbara is starting to worry about Dick and so Bruce lets her in on their secret, and that he’s figured out she’s Batgirl.

What they got right: There is no painting of Batman as the big jerk or Robin as a whiny brat. There’s some obvious tension and Bruce just isn’t the kind of guy who can work these things out. (Look at his childhood and early life. How would he learn it?) However, a case can also be made for some bad timing on Robin’s part, but I do understand why he got mad about the thug being interrogated in front of his son like that. See other notes for more on that.

What they got wrong: Possibly for space, but they pull out a scene where Dick is trying to talk to Barbara but is stumbling because he can’t reveal he and Bruce are Batman and Robin. It’s referenced when Barbara shows up at Wayne Manor but without that scene you don’t know what’s she’s talking about and it comes off as Barbara worried about Robin running off earlier. If memory serves this issue came out well before the episode aired.

Other notes: In the aforementioned episode, “Old Wounds” Nightwing and Tim’s Robin come across the man, now reformed and working for Wayne Enterprises, with Bruce keeping tabs on him and his family to make sure all is going well. So that’s a happy ending to that tale, which isn’t presented in this miniseries anywhere, which is why I brought it up.

Recommendation: A good start to the transitional storyline. Even though it’s based on an episode, this miniseries does expand on Dick’s quest to become Nightwing that wasn’t in the show, so I still recommend this miniseries.