In our previous trips to Etheria She-Ra has had to stop Catra from stealing her boyfriend, given a dragon a makeover by turning her into butterflies, and turned catmen into a stone wall. What is our hero protecting from Catra this time? A chest full of treasures that Adora just happened to find. So she’s gone from conquering a palace to stealing trinkets. Trinkets that have no magic by the way. Trinkets that we don’t even see but we’re told our heroines are wearing and they make them beautiful but not because of magic. They’re fighting over jewelry.

I’m starting to think Catra’s battle with Queen Angela was about Catra actually wanting to be prom queen and getting confused.

Is Catra the greatest thief or She-Ra that unobservant?

No credits given again, and like last time I wouldn’t admit to writing this. I have self-respect as a writer.

Our story begins as Adora is gardening with Kowl, who for some reason speaks only in rhymes. In a short skirt, no leggings, a huge cape, and that thing she always wears on her head that becomes an eye mask for five seconds when Adora “transforms” into She-Ra. Not the cleanest gardening gear, princess. As she digs with her trowel it hits a box buried under the garden. It’s a treasure chest full of treasures the artist couldn’t be bothered to draw, even when characters are supposedly wearing them, and apparently a mirror that will come into play later. Where do they come from? Adora, who had to be talked into opening it by rhyming Kowl, just says “Etheria is strange, yo” and starts playing dress-up. Because she’s a hero and willing to share Adora calls Glimmer and Castaspella over to also play dress-up, as if they were my cousin’s little girls, the oldest of which is maybe 6? (Happiest little girls I know.) I know this is aimed a little girls, but TV Adora wasn’t playing dress-up, she was running a rebellion against the Evil Horde! I hate to keep bringing this up but I don’t think Mattel understood why girls were interested in He-Man And The Masters Of The Universe. And it wasn’t because they wanted to comb Teela’s hair.

Castaspella, knowing that little scamp Catra is nearby and will want to steal the treasures. He-Man.org’s description (I’m getting the images from this site again because I still don’t own any of the minicomics from this series) says Castaspella knows of “Catra’s jealous lust for anything that belongs to Adora”, but she doesn’t say that in the comics. I don’t know who writes these descriptions but this is “high school drama” enough without adding reasons to the mix. I mean they might be right, but it’s not stated in the comic. It just says she knows the “evil Catra” will want to steal them. I put evil in quotation marks because this girl has nothing on her cartoon counterpart. We’ve seen her conquer one kingdom and the rest of the time she’s just been a nuisance. So she puts a curse of some kind on the mirror. And sure enough Catra steals the treasure chest. And somewhere Hanazuki is sad.

Catra takes them to her cottage of evil and decides to…I’m sure she’s supposed to be wearing them but the artist doesn’t like to make anyone look different ever. Cartoons have an excuse but you can’t draw ANYTHING on this woman to show she’s actually wearing something besides her regular outfit? I can do that and I’m a rank amateur with a minimalist style. It’s not promoting the toys, it’s being lazy! Anyway, Catra looks into the mirror Castaspella placed a curse on because her name’s more obvious than half the GoBots, and now she sees herself old and ugly. Running out of the cottage of evil, she heads to a nearby…pond? I’m going with pond, where she sees she’s a beautiful as ever because even the baddies are attractive on this Etheria. Get this: she’s wondering how she can get back because she’s afraid of water. Lady, just came back the way you came!

Meanwhile, Kowl has found the dress-up set has gone missing and runs to tell Adora. Adora becomes She-Ra…or is always She-Ra…look, complain all you want about how obvious Adam is being He-Man by looking at him, She-Ra in these comics is just Adora with a mask for five seconds. There’s no real transformation here. You’re wasting my time with this, comic! She grabs Glimmer and Castaspella and they go off in search of the chest. They come upon a ghoul that looks like I could fight it off, but because She-Ra doesn’t use her sword as a sword she instead turns the ghoul into a butterfly. First the dragon and now this guy totally out of nowhere. Etheria doesn’t naturally have butterflies, folks. They’re all monsters who dared to cross She-Ra and suffered for it. DON’T @#$# WITH THE PRINCESS OF POWER! SHE WILL BUTTERFLY YOU! Seriously, though, what was the point of that? It’s like a page and a panel of unnecessary space. 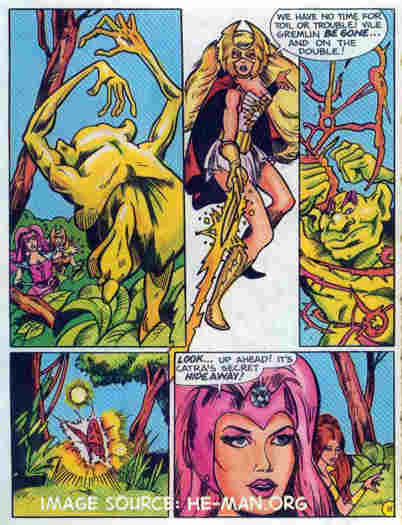 Maybe they could have used that space to explain what Castaspella’s spell actually does? When they find Catra she’s sitting by the pond complaining that she has no desire for the trinkets and that she’s helpless. FROM WHAT? Here’s now He-Man.Org tries to explain this: “Using her staff, Glimmer quickly guides the band to Catra’s cottage, where they find the devastated feline, spellbound and practically catatonic at the loss of her youth and beauty.” Except that’s not what’s happening. When she went to the pond she saw she was still her lovely (but evil) self. She should be afraid of the mirror, not so afraid of the water she suddenly can’t move, which is what I think she was saying when we last saw her. Explain this curse, Castaspella! And explain why the artist can’t decide if you and Glimmer have long hair or not!

She-Ra tries to undo the curse and Castaspella admits she was the one who cursed the mirror. So we know Castaspella has stronger magic than She-Ra. It would make sense if I understood how these characters work in this reality but I haven’t a clue, and I don’t think the people who made this series of comics did either. Despite Catra now begging for help, Casty doesn’t want to break the spell, tired of Catra’s meddling, and yes she DOES sound like the aforementioned high school drama or comedy. “I wanted to teach her a lesson for her meddling, and ruining the dance because she wasn’t the star, and trying to shut down our cover band.” She-Ra tells her to do it anyway because maybe Catra will be kind to them someday (fat chance) and so she does it and then hates herself because Catra could have died–somehow–and the moral is about…not playing practical jokes on people. Like your arch-villain who tried to kill you two stories ago and brainwash your boyfriend last story. What is even…?

Good lord this series gets dumber every time I visit it. The curse makes no sense, the dialog is horrible, and we have a scene where She-Ra turns another evil monster into a butterfly for no reason than to have She-Ra turn a monster into a butterfly. And who says it was evil? It scares Glimmer and goes to attack. We just assume he’s evil because She-Ra butterflied him. Somebody tell me these get better eventually? Unless I find a new series of minicomics to go over I think we’ll check back in with the DC heroes next time and hope that makes more sense. I’d say “it couldn’t get worse” but I’m not about to make that challenge because I know I’ll regret it.

Posted by ShadowWing Tronix on May 24, 2017 in Free Comic Inside and tagged Castaspella, Catra, Glimmer, mini-comic, Minicomic, Princess of Power, She-Ra.