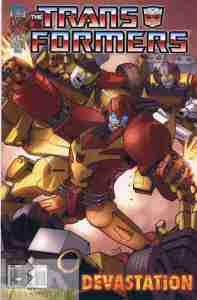 “Someone call Sideswipe. He has a new twin brother.”

Hot Rod and Wheeljack are attacked by an army of Sunstreakers. One of them removes his head, which transforms into a cybernetic-enhanced human, referring to his group as Headmasters. Hunter sees this on a monitor, faking being under Machination control, before running into the head of the actual Sunstreaker, who begs Hunter to kill him. Meanwhile, Optimus has Ratchet take an escape pod with Verity and Jimmy while the others divert the Ark away from the city and into the sea, activating a self-destruct device. Megatron orders Sixshot to track down the escape pod, while Blitzwing tells Astrotrain that he (most likely meaning Starscream) is awake.

What they got right: The design of the Headmasters doesn’t match the classic design (also seen in the “Titanmasters” of the Titans Return toyline), but I think I like this one better. They’re all based on Sunstreaker (I’ll come back to that), but the face isn’t hanging off of the back with the Headmaster bending over backwards to form the head. I don’t know if this would be possible with the toys but the head integrates into “human mode” a lot better than the toys do.

What they got wrong: Although apparently the Machination lacks any creativity because they’re all Sunstreaker. There’s also a scene where Dealer asks to join Hot Rod on Earth, part of Doubledealer’s continuing ploy, but outside of reminding readers he’s in this continuity what was the point of these four panels?

Other notes: This comic also marks the printed debut of Transformers Mosaic, a series of one-page character focused comics that started on Transformers forums. Not all of them were published in the comic, since this was an out-of-continuity fan project. “Rain” [WRITER: Linda Cormak; ART/COLOR: Kris Carter] is about Hound (from what appears to be the G1 cartoon) enjoying rain on Earth since it isn’t acid rain like on Cybertron. (Wasn’t that in just one story, and an artificial rain cloud at that?) It’s okay, but it probably made more of an impact on Hound’s fans. I like Hound, but he wasn’t on my favorites list so I may not be the best judge. Quality-wise it’s good art and a decent short though.

Recommendation: A decent enough issue that only strays from the story for a few panels, although we still have two stories going on at the same time that have little if any connection to each other. This is still Simon Furman after all. Worth checking out.