Friday Night Fights: And He Didn’t Throw A Punch

I like to find fights that aren’t the usual fists-and-lasers, and I have on tonight. I know I’ve been using the Phantom a lot but these comics tend to have the best fights of the week’s reviews, so we’re going there again.

This time the bad guys are child kidnappers looking to force kids into the army cult, based on real-life events, so this fight has a bit more to it. I hate the thought of people hurting and brainwashing children. However the Phantom wins this fight without throwing a single punch. Just being awesome…and having a few pygmies behind you doesn’t hurt, either.

Because I missed round 9.

This latest kidnapping was also a trap for the Phantom. However, trapping the Phantom is one thing. Keeping him is another.

“I have a headache.”

The thing is the guy they’re working for, “Him”, claims to be a god. The Phantom is here to show them that he is no god. But not everyone is willing to believe that. Especially if you’re a high-ranking soldier who likes the power of working in the upper management of a child-stealing army cult.

I know, last fight he pointed a gun at somebody. But it’s not the same when the Phantom does it. Because that guy wasn’t the Phantom.

Because when you point a gun at the Phantom, you suffer the wrath of the Phantom! 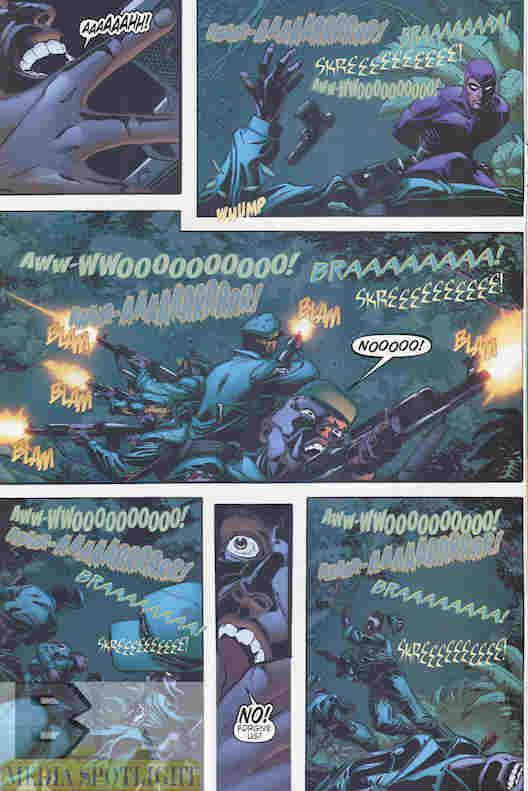 And the Phantom didn’t have to hit anybody. He had his Poison Pygmies do it. Oh don’t worry, they were only knocked out, not killed. Not that the Phantom told the commander that when he woke up next to what he thought were a pile of dead bodies, but I don’t post images like that. They were actually arrested while the commander was sent to give Him a message. But I’m saving that for the Prize Fight.

Head to Spacebooger.com by Sunday night and vote for your favorite Friday Night Fight! Winners of these 12 rounds head to the Prize Fight, so feel free to join in. We could use the competition. Rules are posted on Tuesdays.