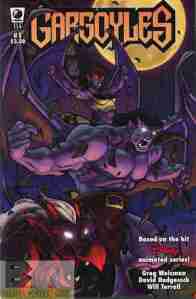 You know, I’ve always wondered what they do with all that stone that flakes off them every night?

No inker or letter listed and another series without an editor mentioned. So who did the lettering? Did the colorist have to ink too?

At the end of season 2 the existence of living gargoyles was revealed. Now the people of New York aren’t sure about them, made worse by the formation of a gargoyle hate group called the Quarrymen, who go hunting gargoyles in the day while they sleep. Unaware of this new group the Gargoyles have moved from the destroyed clock tower back to the castle, with David Xanatos claiming he has reformed. Goliath goes to see Elisa and ends up there when the sun rises. When his stone-sleep form is noticed by the Quarrymen Elisa must protect him until the sun sets. While they escape, Goliath is shot.

What they got right: I’m going by old memories here because I haven’t been able to watch any episodes of the series since it left TV. However, I do remember this being a good adaptation of season three’s opener. (More on that in a moment and later tonight.) It sets up the new direction the story would take now that people were aware of their existence.

What they got wrong: The art is…not the best. Not bad, but facial expressions need and so does the body language. (And those are my problems too, so don’t think I’m relaxing in my glass house or anything. Maybe if they had an inker? And who did the lettering for this comic?

Other Notes: This is part one of the adaptation of “The Journey”, which is the opener to the third season, which Disney moved to their newly acquired ABC for their Saturday morning lineup and subtitled The Goliath Chronicles, even though all of them were still in the show. It’s the only episode Weisman worked on before leaving (contributing a line of dialog to one more show). He doesn’t consider the rest canon, with only this two-part adaptation being brought into his canon and setting up a new threat for the Gargoyles. Fans are usually negative against The Goliath Chronicles but tonight I plan to offer a defense because while it was lacking something I still rather liked it, and I was kind of sorry Weisman decided to ignore it for the comic even if I do understand why. So stay tuned for that.

Recommendation: This is the story according to Weisman. How much was planned out past this adaptation and how much was created for the comics I’m not aware of. However, it’s sort of a must-read, if not a must-own, for fans of the series as the “official” continuation.