Chapter By Chapter: The Death & Life Of Superman ch. 7 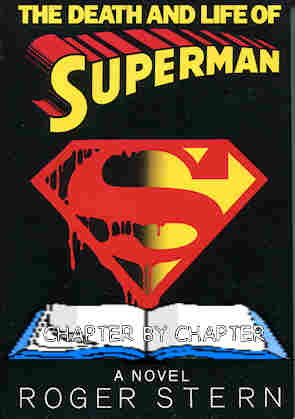 In our last chapter the Justice League (roll call: Blue Beetle, Booster Gold, Fire, Ice, Guy Gardner, Bloodwynd, and Maxima) were heading out to face some mysterious creature. It’s not much of a spoiler who it is at this point. Bloodwynd I really don’t know at all and Maxima I only know from a couple of comics and Superman: The Animated Series. I can imagine the less knowledgeable you are about the characters the less involved you’ll be when their butt-kicking happens. Whether or not it’s this chapter I don’t know, but they do all survive this. I think. I know Ice died at some point but I’m not sure it’s here.

That’s kind of a hard job ahead of Stern. If you read the comics regularly you know who they are, but this novel was probably targeted at casual Superman fans, so they aren’t up on their DC Universe lore. So Stern has to give them enough to care without bogging them down with backstory and continuity. It’s quite the balancing act and too many comic writers today just give up on the whole thing and blame it on continuity rather than not wanting to work around it, like the best or even good writers can. But the fighting isn’t starting here and there are two more characters we need to be aware of. That’s not what I originally wrote since I thought the fighting did start here but I’m not into clickbaiting and this is still interesting.

Oh, the Justice League is still here, checking on the scene and treating the injured before going after the Creature. That’s good to see. You don’t always see the superheroes helping with the scene of the battle unless the writer or writers have time to get it in. Once things are stable, however, they take off.

The main focus is on Superman doing a rare public appearance on Cat Grant’s talk show. (For those of you who only know her from watching Supergirl on TV, she is a character from the comics.) You get some insight into Superman’s discomfort with public speaking, more of his crimefighting philosophies…it does add some more weigh to what’s coming. “Funeral For A Friend” is about the influence and positivity Superman brought to people. For anyone who hasn’t followed the comics to this point scenes like this help spell it out for the book readers.

We also get what I hope are the last two characters we need to know about because the introductions are getting old to someone like me who knows all these people, even if I recognize the importance of these introductions. One is a hint about another important character to the arc, Hank Henshaw, an astronaut Superman couldn’t save although he did save the man’s wife when their space shuttle crash. The fact that he was irradiated is important but Superman cuts that thought off. The other is Bibbo, the former boxer who runs a bar in Suicide Slum and considers Superman is “fav’rite” because of how tough Superman showed himself to be in earlier encounters. Bibbo isn’t the brightest star in the sky but he’s a decent guy and he’s made friends with both Superman and Clark.

Also interesting is both at the high school Superman is appearing at and another school miles away where they’re watching on TV some kids are more drawn to Guy Gardner than Superman. I understand not being into Superman’s approach and liking the more gung-ho heroes…but Guy? That’s just depressing.

And right from the first two sentences of the next chapter I know we’re about to see some of that gung-ho in action. It’s time for Doomsday to meet the local heroes…and the local heroes may not be happy about it.