He-Man Newspaper Comics: When You Need An Extra Something

So we’re about halfway through the Dark Horse collection of the old He-Man newspaper comics. So far I’ve been enjoying them. While there have been some complaints (because nothing’s perfect) overall they are good stories. This month’s installment is going to deal with something even more dangerous and destructive than anything Skeletor could possibly plan. He-Man is about to face one of the biggest threats ever….TMZ!

Yep, a gossip reporter who wants to break stories whether they exist or not like “is Prince Adam marrying the princess he just happens to be going to a performance with because man and woman cannot be just friends don’t be silly” or “He-Man is so broke he has to help Evil-Lyn sell her cosmetics to live on”. Oh yeah, and Evil-Lyn is the Avon lady of doom now. You know, this story sounds weirder when you explain it than when I read it?

“When You Need An Extra Something”

It’s Adam’s royal duty (for some reason) to escort visiting princess Benura Of The Isles to some kind of stage performance but lucky for our hero she’s actually a pretty decent person. On the other hand you have the real villain of this piece, gossip reporter Clarice Tarton, who wants to pair the two of them up romantically. Then the secondary villain, Evil-Lyn, buys time on stage (how one does that for a benefit when you should be wanted for numerous attempts to take over Eternia is beyond me–Eternia is a weird place) to push her new cosmetic, Foreva, and gives away free samples to all the women. Has she really reformed? Do you really have to ask? 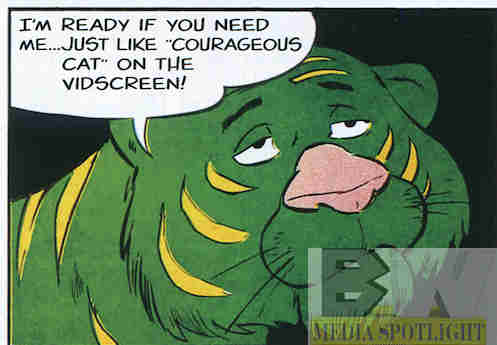 “When did you get bra…Cringer, what happened to your nose?” “Just a coloring error. This whole strip!”

Without giving away her scheme I have to admit it’s actually a rather clever one. But for those who have read the story…if the women are wearing the cream how did it affect the stuff she’s actually trying to get? Yeah, it works later when Skeletor does something to the magic involved but I don’t quite follow it. Eh, it’s not the weirdest scheme this planet has endured. I’m not sure why it doesn’t bother me that cosmetics exists on this version of Eternia though. There haven’t been signs of vanishing cream or other such things although in some versions women do seem to be wearing make-up so I can let this pass.

The idea of news and television still confuses me though. We’ve seen this in past stories in these newspaper comics but in no other version of Masters Of The Universe, cartoon or comic, have I see the press let alone celebrity gossip reporters and stand-ins for TV and radio. It just feels out of place, and all Clarice really does is be really annoying. I do like the trick Adam uses to get away from her at one point, and we learn that in this continuity the Power Sword is still invisible when Adam pulls it from the sheath on his back, which is also hidden as Adam. Then again we’ve seen the sword on Adam’s back in previous comics, Randor even thinking about how it’s a family heirloom so there’s a continuity error here. I wouldn’t mind if Clarice never showed up again. 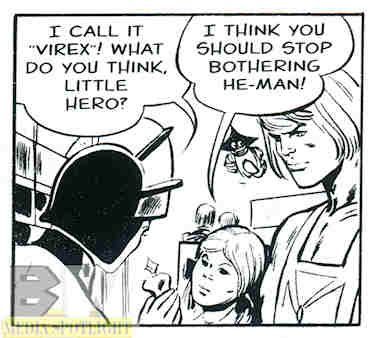 On the other hand we have Sarindy. In one scene she is honored for helping a friend of hers out of a well even though she’s in a hoverchair. (It’s like a wheelchair but hovers. Because sci-fi.) She later is called upon by He-Man because she appears to have the smarts of Sherlock Holmes, who is even referenced during the mystery that is the main part of the story. She’s also the only other person not fooled by Evil-Lyn besides He-Man and Orko. Sarindy shows herself to be a good asset and I hope she comes back again. I like her.

In previous reviews I’ve complained about how short the endings are, like Weber needed another week to finish the story proper so it ends up screeching to a halt. While another day or two might have helped (which would have been hard given these comics either end on a Saturday or a Sunday for pacing reasons) that wasn’t a problem in this storyline. The ending is quite satisfactory.

We don’t see a lot of Princess Benura but she’s likable. I wouldn’t mind a return visit but I think she and Adam are more fun as friends than as a couple. We’ll be seeing more of her next time as our heroes visit their home. Too bad “It’ll Be A Cold Day”. Bring a heavy coat!

Posted by ShadowWing Tronix on May 24, 2018 in He-Man Newspaper Comics and tagged Comic Strips and Panels, Cringer, Evil-Lyn, He-Man, Sarindy.