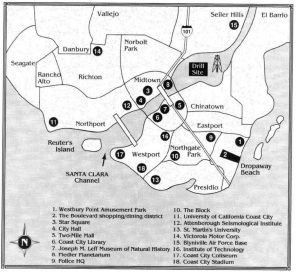 This is a map of Coast City, a fictional city in the DC Universe. In our reading of the novelization of The Death And Life Of Superman, a novelization of the story arc where Superman died and got better, we’ve reached the part where Coast City was destroyed by Mongul, working with (or for, according to the chapter) the Cyborg Hank Henshaw, at the time masquerading as one of two potential resurrections of Kal-El (Spoiler: neither were), and one of four potential replacement Supermen in the “Reign Of The Supermen” story arc. The goal was to create one of the engines that would turn Earth into a new Warworld. In Mongul’s case it was to get revenge on Superman for costing him the old one. We’ll get to Hank’s motivation in due time.

Now Coast City is important for one major reason: it was the home base of Hal Jordan, the Green Lantern of sector 2814 as the galaxy is cataloged by the Guardians Of Oa. (They’re the little blue guys responsible for forming the Green Lantern Corp in the first place.) This event had a huge impact on the character, which it should have. The problem is the biggest event of his life, the destruction of his home city and the deaths of people he knew both casually and closely, were all destroyed with it (with a few exceptions) and he wasn’t there for it. This is a big deal not only from the character’s perspective but as a written work as well. For the latter, which I’ll be focusing on here, this was a huge mistake.

[UPDATE: 10/14/2018] Some quick research tells me that Hal actually did show up to fight Mongul in the comic version of Reign Of The Supermen, at least according to one source. If that is indeed the case then having him only show up at that point, after Coast City is wiped out in a different book was still a bad move in the comics and his lack of acknowledgement in the Death And Life Of Superman novelization I was reviewing at the time was still a mistake, so the points in this commentary still stand.

I mentioned these events briefly years ago when I discussed how the writers and mandating editors have a nasty habit of mistreating the cities they created as part of the problems DC was having at the time and why I had lost interest in the DC universe. (And it looks like Didio isn’t giving up on making DC a….darker continuity.)

I think Coast City was the first one to go down (this was after Star City and Lian Harper), and oddly not in the pages of Green Lantern, which is the comic that mostly took place there, being Hal Jordan’s city. Instead, Hank Henshaw, then masquerading as the “Cyborg Superman”, used Mongul to destroy the city during the “Reign of the Supermen“. Their plan was to use the new “Engine City” to turn Earth into a new “Warworld”. (Also, Hank’s ex-wife used to live there. Yeah.) Still, it caused Hal to go insane and take on the identity of Parallax. At least until a writer and editor who worships at the idol to Hal came along. There is nothing about this that wasn’t stupid. If it wasn’t for Lian and pretty much the rest of Cry For Justice, Coast City’s destruction would be dumber than Star City’s latest smackdown. Actually, it’s still up for debate.

I don’t know how much of Hal’s supporting cast was killed off. What I do know is that, as stated, Hal turned evil, killed the entire Green Lantern Corp to get the power to become Parallax (later retconned to be some kind of space bug representation of the yellow spectrum that’s used by the Sinestro Corp because Geoff Johns likes complicating things). And as I also noted this doesn’t even happen in his own book. Instead, a hero’s home city was destroyed in a completely different book, and a storyline he wasn’t even part of! In case you thought Roy Harper losing an arm and a little girl in a story he had nothing to do with was part of some new trend. They basically fridged an entire city just to ruin Hal Jordan in order to create Kyle Rayner.

This is something else I’ve talked about before, and note that while I grew up with Hal, Kyle is my favorite Green Lantern before you accuse me of stuff. At the time DC wanted to diversify their mostly white male superhero lineup, and I don’t have a problem with that. But like Marvel in recent years their method wasn’t the smart thing and create and promote new characters of different colors, genders, and world views, but to kick out old characters in favor of new ones that would take their name in place. The difference is that DC of the 1990s made good characters and wrote actual superhero stories instead of slice-of-life stories that reluctantly had a superhero moment. Kyle, who is half-Irish and half Asian, was part of that legacy of diversity namesakes, wearing the last surviving Power Ring from Hal’s assault. So in order to make the new GL accepted they made the old GL evil. Sound familiar, Nick Fury? 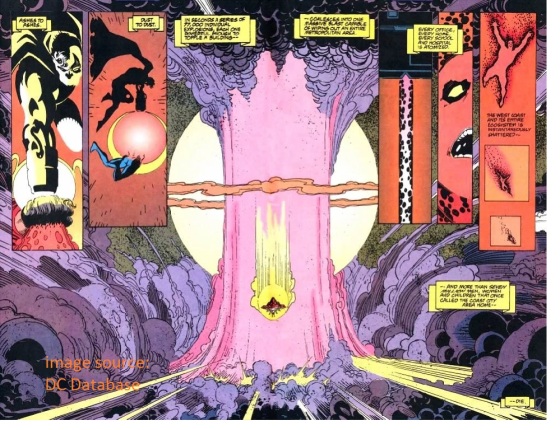 Not that Hal would want to see this mind you.

Look, we can have different opinions on all that, but that’s not what’s important here. What does matter is that the single biggest moment in Hal’s history, the destruction of his home city, didn’t happen in his book or even in a storyline he was a part of. Green Lantern stories at the time were split up between superhero tales and “space cop” stories, which is one of the strengths of the character at the time. However, if they wanted to have Hal lose his city, turn evil, and lead to the creation of a new Green Lantern dynamic, why wasn’t he a part of it? The story was contained to the four Superman titles at the time so having his comic crossover may or may not have worked out. But at least have him there during the events. The Justice League (which included former Lantern Guy Gardner) was there for Superman’s death.

Part of Hensahw’s plan that we saw yesterday in the novelization was keeping the League out of things so they could start building Engine City, but this is Hal’s home. Instead one of the Supermen, the Kryptonian, is the one to be there and barely survive Coast City’s destruction, a position Hal should have at least been alongside if not outright the only one there. The point was that Henshaw was supposed to be keeping the other Supermen out of the way so they could create Engine City on Coast City’s remains, but wouldn’t stopping Hal as well fit into that plan?

And why Coast City? Why not have it happen to a different made-up city. Heck, name it Engine City, make a former coal plant city or something, have Henshaw make a crack about it becoming the first engine for the new Warworld, and it would have been good. Have Hal fight his own battle to protect Coast City, lose, and then you still have the motivation for his going insane and seeking the power to bring it back. Narratively speaking, having it happen in a story he was completely divorced from seems like a rather lame idea, and would have confused readers of Green Lantern who weren’t reading “Reign Of The Supermen”. It just feels like a poor decision all around.

(Also, having Hal doesn’t mean you couldn’t have another Earth Lantern for your diversity checklist. Heck, there’s at least six Green Lanterns from Earth and two protecting it currently in the comics. Plus you had John Stewart, a black Green Lantern, already. Hal didn’t need to turn evil either.)

Whatever you think of how DC approached its admittedly needed diversity problem at the time, whether you thought evil Hal was a good or bad story decision, and regardless of your opinion on Coast City’s destruction, the way DC went about it was a mistake. While this was fixed in later years and Coast City is arguably better than before, it’s about the hows and where. It was done the wrong way in the wrong story, and that’s something to think about, because it wasn’t the last time DC wrecked one of their created cities and I’m sure it will happen again. How’s Themyscira doing these days?