Chapter By Chapter: The Death And Life Of Superman ch. 25

I said I’d show you the bookmark when I got my computer back. 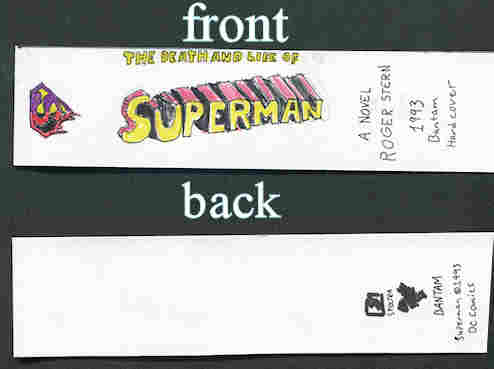 No, it isn’t a work of art, but I’m happy with it for hand-drawn. It’s also the best rendition of the “S” shield I’ve ever drawn, and sadly it’s the one that’s half-bleeding. I think I should have switched shades of red, but it’s not bad for my first bookmark. Now back to the story.

Last time we saw the destruction of Coast City, which narratively speaking was a bad idea considering it was a story in which the city’s protector has no connection to the story whatsoever. I made that rant last week, so let’s continue on to see what Hank and Mongul have planned. But it’s a party and everyone’s invited…to die!

Chapter 25: Reign Of The Supermen part 7

This chapter has a lot of answered questions. We still don’t know where the Cyborg Not-Superman came from or how he contacted Mongul, so no answers there. However, Mongul isn’t quite the loyal flunky he’s been pretending to me. That’s the Mongul we know and loathe, the guy working to back-stab his “master”. The Cyborg is hoping to turn Superboy into another of his “loyal” subjects, but Mongul allows the captured teen to find out that Metropolis is the next Engine City they need, and the kid is not going to let that happen.

The Cyborg also uses his technological half to create false images of the Kryptonian being evil, and tricking the Justice League into going into space. He’s so convincing that Lois can’t convince anyone he’s full of it because of his line about having powers at Superboy’s physical age, which Clark didn’t. I’m guessing nobody’s checking on the former Coast City, which seems odd. That does showcase just how trusting everyone is of Superman and how they believe Cybie is Superman.

The real answers are from the Kryptonian….or rather The Eradicator! In this universe the Eradicator was a Kryptonian artifact that kept trying to convince Kal-El to act like a Kryptonian but at the cost of Earth, which it wanted to turn into a new Krypton, and his Earthly heritage. In their last battle it was turned into energy (long story, I’m sure) but when it learned of Superman’s death at Doomsday’s hands he decided to use Kal-El’s body to create a new one. However, this was after Jonathan brought Clark back from the other side, so while Superman was healing the Eradicator used part of the tomb to form a new body in his image, and used Superman’s body to heal himself and take on his powers. I’m guessing in this reality the Eradicator is also the one responsible for the Fortress Of Solitude, and I’m not sure how I feel about that. I really like the idea that Clark created it himself as a place to escape for a while and train or get away from the noise of the world, but if I read the actual comics I might go along with it.

But this does explain the Kryptonian/Eradicator’s needing the visor to filter sunlight, why he kept trying to recharge, and why his memories were all messed up. The robots fix his memories because he’s mentally falling apart and now have to figure out how to save him. It does all make a lot of sense, although I would have put the reveal of the stone slab Superman’s body was sitting on being shorter out there a little earlier, like a chapter or two ago, or even when they were examining the Eradictor’s taking of the body. Not too much earlier, since it’s here to start setting up the Eradicator reveal (maybe it worked better in the comics?), but in the same chapter it’s a bit close for me.

As for the real Superman, the last news report he saw was the fight between the Kryptonian and Man Of Steel. With the battlesuit’s communication system not working he doesn’t know about Coast City so he’s heading for the last place he knows needs him, the city that always needs him. He’s headed for Metropolis. Things are about to feel a lot stranger for the regular cast. A few hiccups but this was a good chapter as we build towards the finale.

Next time: Reign Of The Supermen part 8