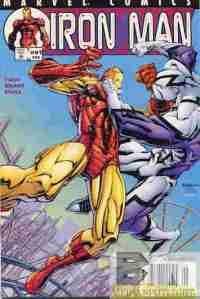 Instead of a joke I want to ask…has Blizzard ever fought Iceman? If not that’s way overdue.

As Tiberius starts getting addicted to his Dreamvision both Tony Stark and Iron Man’s reputations keep getting worse. A guy who tried to aggressively pick up Rumiko at a club some issues ago is at it again and Tony takes him out, but seems to be using his face as a way to get aggression out from what’s going on. With the classic armor damaged he has to use an even older model to take on Blizzard and barely manages to win, which finally convinces him to push past the fears of the sentient armor and build something new. However, all the news wants to talk about is the damage and not the saved lives. Finally having had enough Tony decides to ditch his fortune and close down Stark Solutions.

It’s rare for me to not have something positive to say about a comic I’m reviewing but all I can find are negatives. The art is terrible, with a lot of exaggerated angles and line. One pose looks like Iron Man is Mr. Fantastic. This is 1990s level of bad art and I was hoping they were past this by now. I was hoping Stone would go away for awhile but he’s still making his presence known, using Dreamvision to imagine Iron Man’s being expelled from the Avengers and arrested for Whiplash’s murder (he actually was cleared of the charges, so there’s your positive) or that Tony’s ex-loves are now worshiping him. Why is this guy here again?

The part I found most disappointing is that Tieri gets rid of Stark Solutions. I always felt Kurt Busiek didn’t do enough with the concept. Joe Quesada ignored it and Tieri gets rid of it altogether. Plus we have Tony going pauper…again. Why do Quesada and Tieri only want to focus on the worst parts of Tony and Iron Man’s past? I did not enjoy this issue at all, nor can I recommend it for Iron Fans. Between the story and the bad art it’s just not a good time.