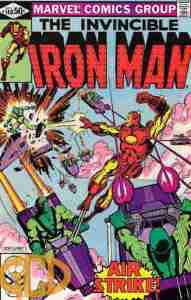 It’s amazing what you can win on a game show these days.

“The Use Of Deadly Force!”

After the events of the previous issue (which I do not own as of this writing), Tony takes his friends Rhodey, Bethany Cabe, Dr. Ehrmann, and Ling McPherson to his private island so Ling can recover from her injuries. However, their days of fishing and relaxing (and Rhodey’s pursuit of the maid) are cut short when the supervillain Force leads a group stealing large ships in the area, and they unknowingly target Tony Stark’s yacht while Tony and Rhodey are deep sea diving. Bethany manages to toss Tony’s Iron Man briefcase to him (he doesn’t know that she knows he’s Iron Man) and Iron Man manages to take down the bad guys. Unfortunately he’s distracted long enough that Force is able to get away with Bethany and the yacht for his new boss. Meanwhile a future story is teased when the population of a small town just suddenly drops dead.

What they got right: Where was this Bob Layton years later when I was reviewing the Bad Blood miniseries? This is the art I expect out of the man. The action was good, the quiet moments were good, and it was a good read.

What they got wrong: I snuck a peek ahead and there’s no sign of this tease continuing next issue. It seems a bit early. I’m also wondering why this is one of the two stories chosen to be reprinted for the “100 Page Monster” when it doesn’t seem to have any ties to what’s coming up with the Sons Of Yinsen.

Recommendation: This is a real good outing from Micheline and Layton. This is one to pick up, depending on how the conclusion ends, which is also reprinted here so I’ll review that next Marvel Tuesday.