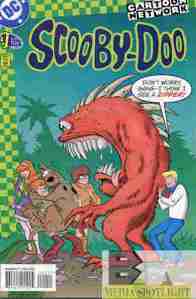 “Wait, that’s not a…geez, what did you have for lunch?”

“Scooby In The Booby Hatch!”

In the main story Daphne tells her aunt about her mysteries and she thinks the girl’s gone crazy. This seems kind of odd all things considered in the Scooby universe but it’s just an excuse to get the gang into an insane asylum to investigate a ghostly doctor. This is the story Kirschenbaum should have been doing for Archie Comic during the run I just finished reviewing. A main story plus a short back-up, a decent mystery for us to follow along with, and the jokes come naturally from their character rather than the constant undercover masquerades of the Archie run. There’s as much thought put into the mystery as the comedy and I enjoyed the story.

The back-up has Scooby sleeping in the van dreaming about the recent mystery involving a fake “frog demon”, only it turns out everyone, including his friends, are cats in disguise. While the story itself is a fun little short story I have to also praise the art here. As the education page DC had in their Cartoon Network comics at the time goes over, dogs don’t see colors so Scooby’s dream sequence is in black and white, save for the Scooby Snacks and a bit of mustard on Fred’s cheek, indicating that for Scooby food is better than gold. The others also aren’t as polished in the lineart as Scooby and Shaggy is, indicating that Scooby is more closely tied to Shaggy than his other friends. It’s a nice touch on the art team’s part that benefits the story.

Overall, this was a great issue to read and one to check out for Scooby-Doo fans.